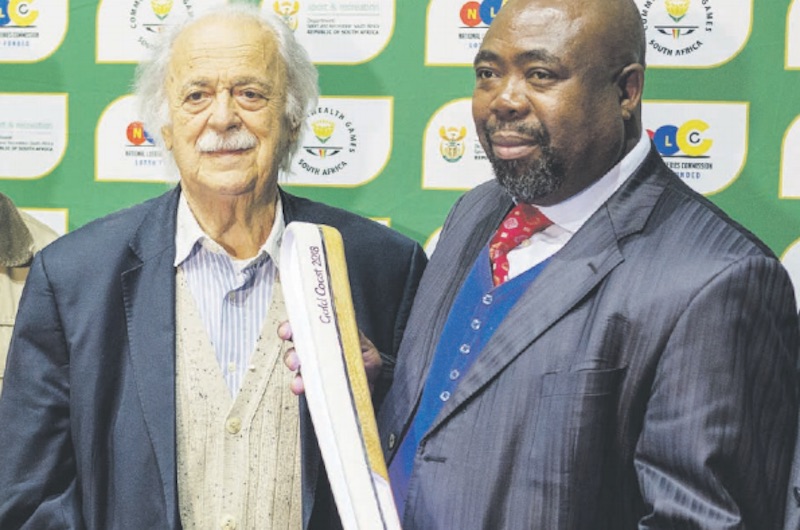 BATTING ON. Human rights lawyer George Bizos and Minister of Sport and Recreation Thembelani Thulas Nxesi with the Queens Baton during a welcoming ceremony at Sascoc in Oaklands, Johannesburg, yesterday. Picture: Yeshiel Panchia

Athletes aiming to compete at next year’s Commonwealth Games will be given an easier ride than they got for the previous edition of the quadrennial multisport spectacle, the SA Sports Confederation and Olympic Committee (Sascoc) has confirmed.

While they needed to be ranked in the top five in the Commonwealth to qualify for the 2014 Glasgow Games in Scotland, Sascoc chief executive Tubby Reddy said yesterday athletes would require top-10 rankings in their disciplines to book their places in the national squad for the 2018 Gold Coast Games in Australia.

“Qualifying for these Games is a little more lenient than the previous one,” Reddy said at Olympic House, after the Queen’s Relay Baton arrived in the country in the build-up to next year’s showpiece.

“By keeping it more broad, you’re giving more people a chance to compete at that level.”

In the process of finalising the organisation’s qualifying policy ahead of the 2020 Tokyo Olympics, Sascoc had been expected to loosen the screws on their controversially extremely strict criteria to drive development forward ahead of the 2022 Commonwealth Games.

Despite Durban being stripped of the hosting rights, Reddy said the selection committee had opted to retain a broader approach by taking a larger team to the Gold Coast Games.

“I’ve always said to the federations: ‘You come change the policy. You’re the membership, and if you’re not happy, motivate other federations and tell us you don’t agree’,” Reddy said.

Sascoc was also in the process of signing sport-specific qualifying documents with the various federations.

After receiving widespread criticism because leaders of certain codes had allegedly made unilateral decisions, with some athletes threatening legal action for being omitted from teams in recent years, Sascoc now required federations to prove they had the backing of their executive committees and councils before agreeing to the latest qualifying criteria.