So near, yet so far for SA mountaineer 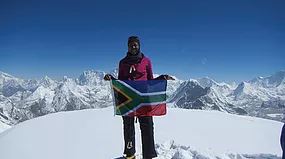 Though she reached her highest point thus far on the world’s tallest peak, South African climber Saray Khumalo missed out for the third time this week in her attempt to summit Mount Everest.

Continuing her persistent efforts to become the first black African woman to reach the summit, Khumalo made it to camp four but was forced to turn back from the ‘death zone’, as the final stretch up the mountain is infamously known, after suffering from exposure.

“Saray did not plant the SA flag on Everest this time. She was evacuated from C2 to Kathmandu and is being treated for her injuries,” her team confirmed on social media.

Reports suggested she was recovering from frostbite, but she had picked up no serious injuries.

At her first attempt in 2014, Khumalo reached base camp before her climb was halted by an avalanche which killed 16 sherpas, and in 2015 she made it to camp two before the expedition was abandoned due to an earthquake.

While Khumalo was airlifted from the mountain on Thursday, it was confirmed her compatriot Wilmien van der Merwe had reached the summit, joining a growing list of South African climbers to have achieved the feat since Cathy O’Dowd and Ian Woodall became the first to plant the national flag during the 1996 climbing season.