The 400m runner totally defied University Sport South Africa's insistence for him to go to the world student games. 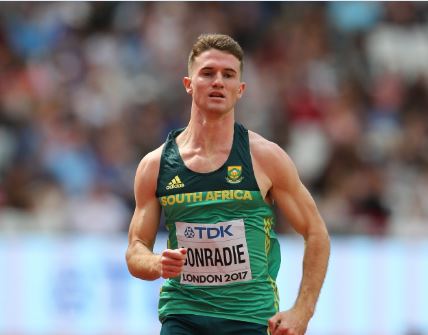 Sprinter Pieter Conradie has landed himself in hot water with University Sport South Africa (USSA) after scratching himself from the start lists at the World Student Games and jetting off to pick up a late invite for the Diamond League final.

Conradie, who competed at the IAAF World Championships in London earlier this month, had been selected for the national varsity team for the multi-sport showpiece in Taipei and was expected to compete in the 400m heats on Wednesday.

Despite being ranked 16th in the annual Diamond League series, however, the North-West University speedster benefited from multiple withdrawals (including injured compatriot Wayde van Niekerk) and received the nod for the lucrative campaign final in Zurich on Thursday night.

According to USSA, his request to depart the team camp had been turned down, but Conradie jumped ship nonetheless, withdrawing from the student squad in order to compete in the top-flight series decider.

He would face a disciplinary hearing for his “sudden departure” from the team.

“We wish to register our disappointment by such conduct of the athlete,” USSA said.

“Such conduct does not represent the values of a true, patriotic South African.”

Conradie was one of seven South African athletes competing in the finals of various disciplines at the prestigious opening leg of the Diamond League final, with R1.3 million up for grabs to the top eight men in the one-lap sprint.

The national student body had also previously shared its disappointment after Olympic and world champions Van Niekerk (University of the Free State) and Caster Semenya (North-West University) had made themselves unavailable for the Student Games in order to focus on global senior competitions.

Long jumper Ruswahl Samaai (University of Johannesburg) had also withdrawn in advance of the Games, due to a tight schedule, in order to concentrate on the Diamond League contest.