Cecily Rootenberg is thought to have created history in her age category at ASA's race walking championship, showing that age is no barrier. 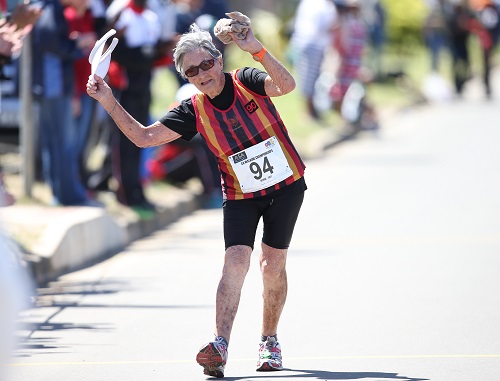 Cecily Rootenberg is still breaking barriers at 92. Photo: Roger Sedres/Gallo Images.
A 92-year-old woman had a small crowd on its feet at the interprovincial race walking championships in George on Saturday, with Cecily Rootenberg completing a historic feat after spending nearly four hours on the road.
Rootenberg, from Joburg, was believed to be the first woman in her age group to finish an official 20km race walk.
Though her torso leaned gradually further to one side as the race progressed, she shuffled back and forth with determination on the 2km looped course.
At one point a concerned spectator joined her on the road, holding her hand for a short period, but Rootenberg needed no assistance and crossed the line on her own before being assisted by officials.
She finished the race in 3:53:41, more than an hour behind the second-last finisher.
Rootenberg was expected to approach the World Masters Athletics organisation to have her time ratified as a world record in the 90-94 age division.
According to their website, the international body for athletes over the age of 35 currently recognised global marks in the 20km walk up to the 75-79 category.
Meanwhile, with the interprovincial event hosting the SA 50km Race Walking Championships, Natalie le Roux shattered the national women’s record by more than 22 minutes to secure the gold medal.
She completed the distance, which is the latest discipline to be recognised by the International Association of Athletics Federations at championship level, in 4:54:33.
Mthunzi Mnisi won the men’s title for the third year in a row, finishing 10 minutes clear of his nearest opponent in 4:36:40.