The Team Massmart athletics club specifically wants to promote women athletes with the aim of glory in the biggest world marathons. 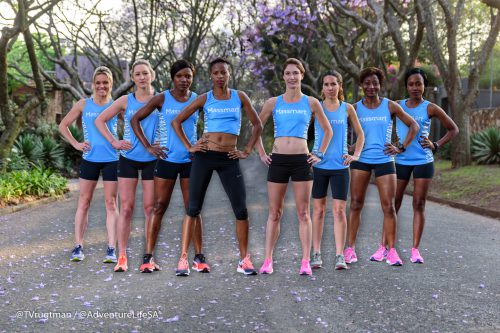 Team Massmart is ready to take on the world. Photo: Supplied.

The Team Massmart athletics club, launched on Tuesday, consisted of eight elite women who competed over marathon or ultra-marathon distances.

“We feel there hasn’t really been enough focus on the development of local talent in the ultra-distance events and over the marathon distance.

“It’s our hope that we can not only foster athletes who are able to compete internationally in marathon and ultra-distance events, but also are able to dominate our local races.”

For the foreseeable future, the semi-professional club would not be open to amateur runners or elite men.

“For the next three years we’re focussed only on a small team of elite athletes and opening our club to Massmart employees as a social aspect, but we will not be expanding our elite team significantly, and we won’t be changing it into a mixed team,” Ashworth said.

Spearheaded by marathon runner Mapaseka Makhanya, who competed at this year’s World Championships in London, they hoped to challenge some of the larger elite local clubs including KPMG and Nedbank, which also boasted strong women’s contingents.

“In athletics men and women are paid the same (prize money) all round, but I think women are overlooked in terms of athletics, or sport, or life in general,” Makhanya said.

“Being a female orientated club will help build a strong community… and a strong foundation so that women can look up to the Massmart team.”

The majority of the squad would turn out for the first time in the new light blue kit at the Kaapsehoop Marathon in Mbombela on Saturday, and Makhanya was set to compete for the club at the Soweto Marathon on Sunday.