Watch out Luvo! Ruswahl Samaai wants to go bigger in 2018

South Africa's long jump bronze medallist at the World Champs warns his opponents that they don't know what'll hit them. 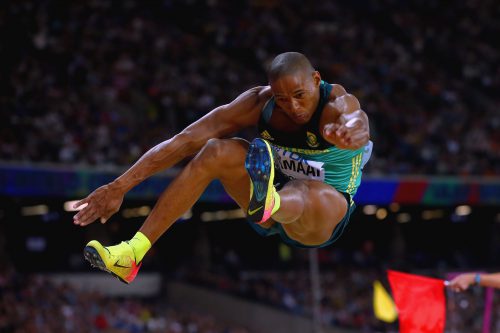 On the back of a breakthrough season, long jumper Ruswahl Samaai is confident of going even bigger next year if he can stay injury-free.

Samaai produced a personal best of 8.49 metres this season, climbing to third in the all-time SA rankings behind Luvo Manyonga and Khotso Mokoena, and he earned the bronze medal at the World Championships in London in a historic double-medal effort with Manyonga winning gold.

Eager to retain his consistency throughout a long 2018 season, which was set to include the World Indoor Championships, the Commonwealth Games, the African Championships and the Continental Cup, Samaai believed he could deliver another impressive campaign.

“People have no idea what’s coming,” Samaai said on Saturday night, after losing out to race walker Lebogang Shange as the Senior Male Athlete-of-the-Year at the Central Gauteng Athletics (CGA) Awards.

“I’m only two weeks into the pre-season and if you put me on the runway now, I’ll jump 8.30m, guaranteed.

“That’s how I feel from the base I developed last year and over the previous years, and I want to be the best athlete I can be without measuring myself against anyone else.”

Distance runner Mapaseka Makhanya, who competed in the marathon race at this year’s global championships, was named Senior Female Athlete-of-the-Year at the CGA provincial awards ceremony held in Fourways.