The veteran continues to show his remarkable consistency as Robert Howie also shows his steel as co-driver. 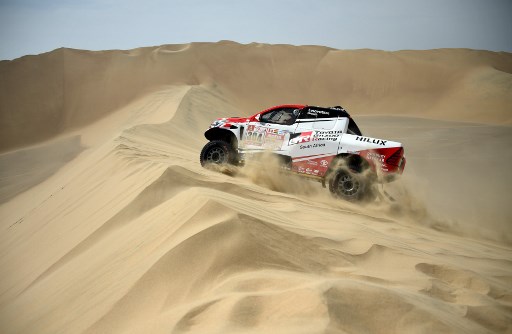 South African contender Giniel de Villiers stayed in touch with the early leaders on Saturday, while foreign drivers got the Toyota Gazoo Racing SA team got off to a cracking start at the Dakar Rally.

After a 242km liaison section in Peru, the competitors battled it out in a 31km sprint near Pisco, which was dominated by Nasser Al-Attiyah of Qatar.

The two-time former winner covered the timed section in 21 minutes, 51 seconds (21:51), with Toyota Gazoo teammate Bernhard ten Brinke of the Netherlands crossing the line 25 seconds off the pace in second position.

De Villiers, meanwhile, grabbed sixth spot with German co-driver Dirk von Zitzewitz, another 29 seconds further back, as the SA outfit made a significant statement on the opening leg.

The South African pairing of Hennie de Klerk and Gerhard Schutte (Volkswagen) were lying 59th of the 88 cars left in the race, while co-driver Robert Howie enjoyed a good start with Argentine driver Lucio Alvarez (Toyota) who settled in seventh position.

In the bikes division, David Thomas (Husqvarna) was the best of the SA contingent, completing the timed section in 29th place. He was nearly five minutes off the pace of British defending champion Sam Sunderland, who covered the stage in 20:56.

Willem du Toit was lying 76th, another 10 minutes further back, and though fellow KTM riders Donovan van der Langenberg and Gerrie van der Byl were both still in the race, they were outside the top 80.

The first full stage on Sunday will consist of an 11km link section, followed by a 267km special stage, as the field prepares to face the challenge of the dunes.