Sports Minister warns Sascoc officials to get house in order before the Commonwealth Games and avoid a repeat of the Olympics kit fiasco. 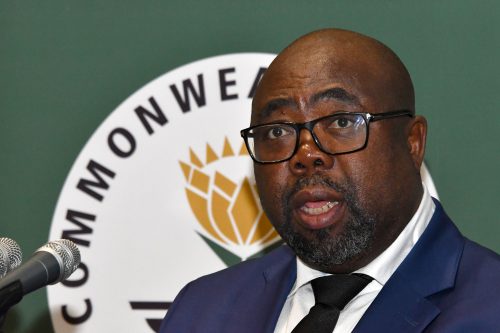 National Olympic committee officials were rapped on the knuckles by sports minister Thulas Nxesi, who pointed out various recent bungles in preparing teams for major events, insisting they get it right at the Commonwealth Games in Gold Coast in April.

Hinting at previous issues, Nxesi warned that he did not want a repeat of the ill-fitting kit the athletes were forced to wear at the 2016 Rio Olympics or the controversy around selection decisions ahead of numerous multi-sport Games in recent years.

“And it’s important that you have clearly explained the qualifying criteria and the whole process, and I hope this goes to the athletes as well as the general public. This matter has caused confusion in the past.”

A 169-member national team was announced by Sascoc yesterday, across 16 codes.

The men’s rugby Sevens team will be added to the squad later in February, the governing body confirmed, and the men’s 4x100m relay athletics team will also be revealed at a later stage.

Some codes had hoped to be represented by larger contingents at the Games, including leading medal contenders athletics and swimming, after the national federations had submitted bigger teams to Sascoc than those which were announced.

The size of the squad, however, had been restricted by international limitations placed on numbers of individual athletes and a hybrid selection process of open and specific qualifying criteria, according to the SA team’s chef de mission Ezera Tshabangu.

The final team had been selected by a nine-member Sascoc highperformance commission which submitted names to the organisation’s board, and Nxesi called on federations and athletes to accept the final decisions made by the selectors.

“Someone must make decisions and they must be held accountable,” he said, “but we mustn’t dispute every decision because it becomes demoralising.”