Following injury and then some poor form, the 25-year-old is revitalised and ready to provide fireworks at the Athletix Grand Prix. 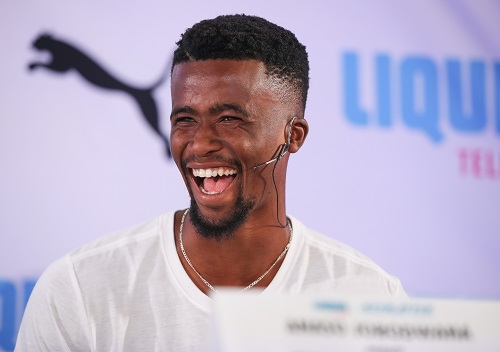 Having settled in his new environment, Anaso Jobodwana says he is feeling revitalised as he picks up the pace on the comeback trail.

Jobodwana played a key role in triggering a South African sprint revolution a few years ago, setting what was then a national record of 19.87 seconds to snatch the 200m bronze medal at the 2015 World Championships.

He spent the 2016 season on the sidelines due to injuries, however, shifting his base from the United States to Durban where he received medical support at the Prime high performance institute.

Training on his own, he struggled to find his best shape last year, and while the likes of Wayde van Niekerk and Akani Simbine kept the momentum going for local sprinting, Jobodwana lost his place in the spotlight.

Going in search of more support, he moved again last week, this time to Pretoria where he linked up with new coach Thabo Matebedi at the High Performance Centre.

“I knew I needed to get back into a competitive setup,” Jobodwana said on Tuesday, ahead of Thursday’s opening leg of the Liquid Telecom Athletix Grand Prix in Roodepoort.

“That’s how it’s always been for me. When I was in the US it was always competitive and I knew whenever I got into a meet I would be driven by adrenalin.”

Bursting back into form, he won the 100m title at the Gauteng North provincial championships in 10.07 last week.

Though he was pushed by a+3.3m/s tailwind, and his time did not count as an official personal best, it was the fastest performance of his career.

“It’s good to be back, feeling healthy and running races,” he said.

Jobodwana was set to line up against World Championships finalist Isaac Makwala of Botswana and in-form sprint sensation Clarence Munyai in the 200m race at Thurday’s Grand Prix meeting at Ruimsig Stadium.