The new 200m national champ has no sponsor or agent and yet he's heading to the IAAF Diamond League this season. 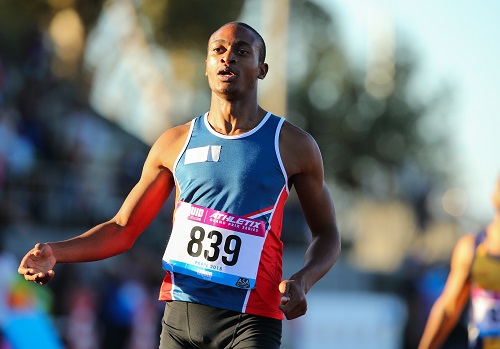 Having narrowly missed out on cracking the biggest mental barrier in his specialist event, Luxolo Adams, the latest addition to South Africa’s growing arsenal of sprinters, believes he will break down the door on the international circuit.

At the back of a breakthrough domestic season, Adams delivered two standout performances over the last week.

In Pretoria last weekend, the 21-year-old Eastern Cape speedster shattered his personal best to win the men’s 200m final at the national track and field championships in 20.08.

At the final leg of the Liquid Telecom Athletix Grand Prix in Paarl on Thursday, he went even quicker, overcoming a choppy wind to storm home in 20.01.

Despite having no agent, and no major international appearances to his name, his latest performances had already secured Adams a place in the line-up for the top-flight Diamond League meeting in Doha in May.

Hoping to face a world-class field, the country’s newest sprint sensation believed he could become the fifth South African to dip under the 20-second mark.

“Yes, yes, yes,” he responded emphatically when asked about the barrier.

“The likes of (Canadian speedster) Andre de Grasse and all those guys, if they can be there, I think I can go sub-20.”

Admitting he was disappointed not to be included in the final SA team for the Commonwealth Games on Australia’s Gold Coast next month, Adams was eager to make the squad for other major championships down the line.

For now, he would head back to training with coach Gerrie Posthumus, and while he was set to watch the Gold Coast showpiece on TV, he had at least one more race this season in Doha to keep him on the track.

Should he race well there, he could open big doors for himself at the highest level.

“I think I can do more as time goes on,” Adams said, “as long as I get the opportunity.”