Despite the absence of a few stars, the first Spar Grand Prix Series race was still a compelling one. 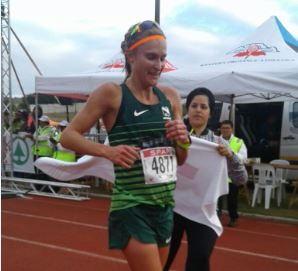 While pre-race favourite Kesa Molotsane secured a commanding victory, much of the attention on Sunday revolved around pregnant distance runner Irvette van Zyl who finished third at the opening leg of the Spar Women’s Grand Prix 10km series in Cape Town.

Molotsane, the defending series champion, stretched out the lead group before breaking clear in the second half, coasting to victory in 34:10.

She finished 29 seconds ahead of runner-up Glenrose Xaba.

Though five of the country’s top road runners were missing, as they were on international duty at the World Half-Marathon Championships in Valencia at the weekend, it was a convincing win by Molotsane who was feeling ill ahead of the race.

“I thought maybe Glenrose was going to break away from all of us, but she didn’t, so after 6km I saw an opportunity and decided to go, just to push the time,” Molotsane said.

Though she lost touch with Molotsane and Xaba on the rolling hills in Bellville, she held on to finish third in 35:07.

“But so far, so good. I’m just running how my body feels and today the little one (her second son) accommodated me to run a nice race. He didn’t kick, he just slept, so I’m feeling blessed.”

The second of six legs in the Grand Prix series will be held in Port Elizabeth in May.