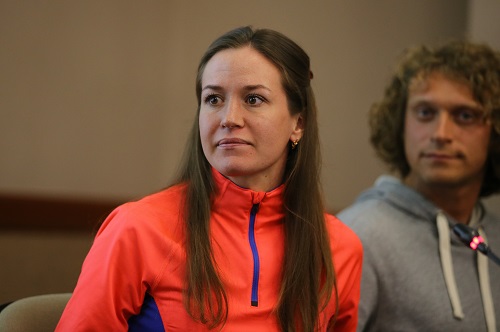 A storm was brewing on the eve of this weekend’s Two Oceans ultra-marathon, as controversial Russian athlete Alexandra Morozova continued to fight for outstanding prize money after apparently being cleared to compete in South Africa.

In a recent statement to the federation’s members, Athletics SA (ASA) chief executive Richard Stander had said all Russian athletes competing in the country needed clearance from the International Association of Athletics Federations (IAAF) integrity unit, as the Russian Athletics Federation remained suspended due to an ongoing doping scandal.

“Only athletes listed as authorised neutral athletes on the IAAF website will be allowed to participate in South Africa,” Stander said.

Morozova had not yet received her gold medal or R210 000 cash after finishing second at the 89km Comrades Marathon in KwaZulu-Natal in June last year, with ASA withholding her prizes.

However, IAAF road running manager Alessio Punzi confirmed in an email this week to ASA and the Comrades Marathon Association (CMA) that Morozova was not restricted from competing.

“Alexandra Morozova is not, and never has been, affiliated to the Russian Athletics Federation and she is not on the IAAF list (of affiliated Russian athletes),” Punzi wrote.

“She was therefore eligible to compete at the 2017 Comrades Marathon (and to be paid prize money for placing in the event).”

The suspended Russian federation had confirmed Morozova’s amateur status, revealing that she was not affiliated to the organisation or any of its members despite being an elite athlete, and Punzi said she was eligible to compete at the 56km Two Oceans race in Cape Town on Saturday where she was expected to line up among the favourites for the women’s title.

In response, however, Stander said the matter had been referred back to the IAAF for further clarity.

Comrades Marathon ‘up’ run record holder Leonid Shvetsov said it was “outrageous” that Morozova had not been paid, claiming he would boycott this year’s race in protest.

“I planned to participate in the race this year, and I still have an entry, but I will refrain from doing this because I totally disagree with the policy of CMA and ASA,” said Shvetsov, a former Olympic marathon runner who denied allegations of doping during his own elite career.

Shvetsov insisted Morozova had “no relation to Russian athletics whatsoever”, and he felt she should not be penalised for being a citizen of the European country.

The CMA and provincial body KwaZulu-Natal Athletics (KZNA) said they could not rule on the matter and the decision needed to be made by ASA.

Morozova had also been accused of breaking the rules by being paced by a male athlete – her coach and former Comrades winner Oleg Kharitonov – but that matter was also unresolved and she remained listed in the official results of last year’s race.