Local paralympians shine on the track as Team South Africa delivers another solid day of output. 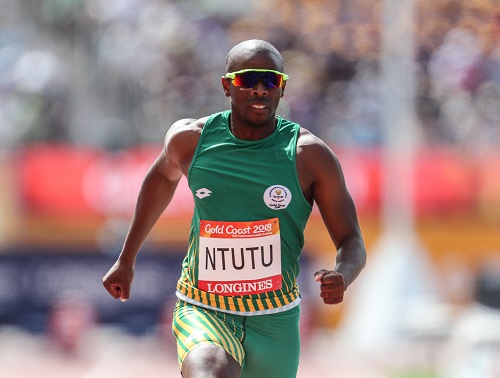 Ndodomzi Ntutu of South Africa in the heats of the mens T12 100m during the morning session of athletics day 8 of the Gold Coast 2018 Commonwealth Games at the Carrara Stadium on April 12, 2018 in Gold Coast, Australia. (Photo by Roger Sedres/Gallo Images)

Jonathan Ntutu and Hilton Langenhoven produced a one-two finish at the Commonwealth Games on Thursday, stealing the show from their able-bodied compatriots as South Africa pocketed another six medals on the eighth day of competition at the Gold Coast Commonwealth Games.

Ntutu left the four-man field trailing as he scorched to victory in 11.02 seconds in the T12 men’s 100m final for visually impaired athletes.

Langenhoven, a four-time Paralympic gold medallist, grabbed the silver medal in 11.27 as the duo emulated the sprint double achieved by compatriots Akani Simbine and Henricho Bruintjies earlier in the week.

“Nothing can describe what I’m feeling at the moment,” said Ntutu, who earned his first major international title at the age of 34.

“I’m sure it will hit me even harder when I get home later.”

Earlier on the track, Wenda Nel was rewarded for her consistency in recent years with a bronze medal in the women’s 400m hurdles final.

Nel crossed the line in 54.96, with Jamaican Janieve Russell winning the race in 54.33.

Munyai, who has withdrawn from the 4x100m relay this weekend after picking up a hamstring niggle in the semifinals, initially crossed the line in fifth place.

Winner Zharnel Hughes was disqualified for impeding an opponent, however, and the South African was bumped up to fourth place, 0.03 outside a spot on the podium.

He went down to former world champion Kumar Sushil of India, who secured a convincing 10-0 victory, but Botha did enough to earn the silver medal.

Compatriot Jan Combrinck made it to the bronze medal playoff in the 57kg category, but he lost to Ebikewenimo Welson of Nigeria.

On the cross country course, cyclist Alan Hatherly produced a gutsy ride to snatch bronze in the men’s contest.

The Under-23 World Championships silver medallist, who recovered from a broken arm in the build-up to the Games, finished third in 1:17:56, completing the race 20 seconds behind winner Samuel Gaze of New Zealand.

Mariske Strauss was the top South African in the women’s race, finishing seventh in 1:22:50.

On the bowls green, the B6/B7/B8 open triples team of Christopher Patton, Tobias Botha and Willem Viljoen bagged a 16-13 victory over England in the playoffs, also filling the bottom step of the podium.

Bringing a close to the nation’s campaign on the badminton court, Michelle Butler-Emmett and Elmé de Villiers lost 2-0 to the Sri Lankan pairing of Thilini Hendahewa and Kavidi Sirimannage in their last 16 match, and rhythmic gymnasts Grace Legote and Chris-Marie van Wyk settled for 13th and 16th positions respectively in the individual all-round final.

Heading into Friday’s ninth day of competition at the multi-sport Games, the SA team were lying fifth in the standings with a total of 32 medals including 11 gold, nine silver and 12 bronze.