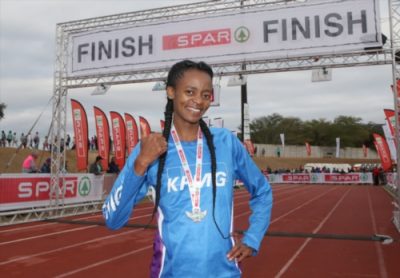 Kesa Molotsane shrugged off a “personal issue”, some sloppy race organisation and a choppy wind to win the second leg of the Spar Women’s Grand Prix 10km series in Port Elizabeth on Saturday, stretching her lead in the annual campaign.

After settling into a large lead group which was forced to dodge traffic due to partial road closures, Molotsane surged on a steep downhill approaching the 8km mark and dropped most of the field, with only Glenrose Xaba able to respond.

Turning onto the beach front, Molotsane’s long drive paid off and she gradually drew clear to secure victory by 15 seconds in 33:46.

“Some issues came up yesterday and I had a bit of a situation, so I wasn’t sure if I was going to be at the race this morning,” said Molotsane, who was believed to have been locked in a sideline battle between professional and amateur clubs on the eve of the race.

“As I approached the starting line everything was still down, so I was glad I could eventually get into the mix. I wasn’t in the race psychologically and I’m just glad I finished.”

Xaba crossed the line in 34:01 to take the runner-up spot, with Patience Murowe of Zimbabwe finishing 15 seconds further back in third place.

Though she built on the fine form she had displayed this season, Xaba admitted she too had almost missed the start due to injury.

“Yesterday I had an issue with my hamstring,” Xaba said.

“I was even crying because I did not think I could run this morning, so I’m happy to end up in position two.”

Festive atmosphere at the start of the Port Elizabeth leg of the Spar Women's Grand Prix 10km series. Irvette van Zyl and Nolene Conrad are giving this one a miss. Kesa Molotsane lines up as the firm favourite. Glenrose Xaba also in good shape. The race starts at 7am #SparLadies pic.twitter.com/JBwQJsNxS2