The Zimbabwean dominated from the start. 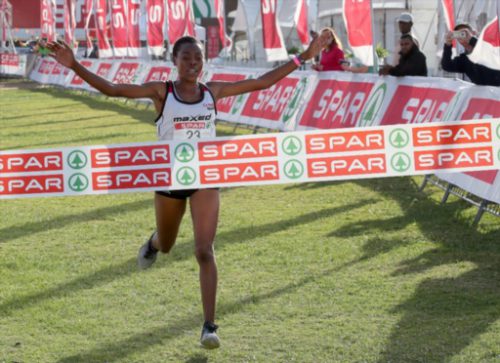 Leading from gun to tape, Zimbabwean athlete Betha Chikanga stunned the elite field on Sunday, charging to a runaway victory at the third leg of the Spar Women’s Grand Prix 10km series in Durban.

Competing in warm, windy conditions, Chikanga laid down the hammer from the start, opening a gap of more than 200 metres by the halfway mark.

While her opponents began to chase her down in the latter stages of the race, however, the 21-year-old athlete held them off to win in 33:07.

“I knew I was fit, so I decided to start fast and finish fast,” said Chikanga, who stepped on the podium for the first time in a Spar Grand Prix race.

Glenrose Xaba secured the runner-up spot for the third straight leg of the campaign, clocking 33:27, and she was rewarded for her consistency by climbing to the top of the series standings ahead of former leader Kesa Molotsane, who slipped to second place overall after finishing sixth.

Nolene Conrad, who was third in 33:43, admitted Chikanga had surprised the rest of the field with her tactical approach.

“I though we were going to catch her in the second half of the race, but she ran excellently,” Conrad said.

“She went out bravely and kept it there.”