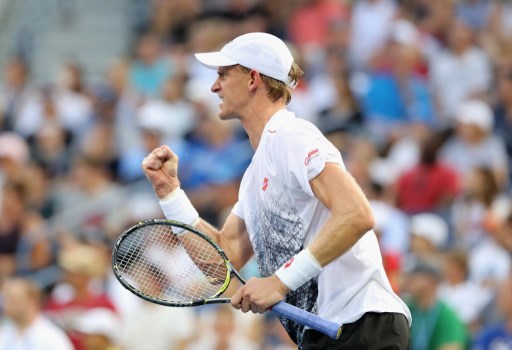 Kevin Anderson of South Africa celebrates in his men's singles first round match against Ryan Harrison of The United States on Day One of the 2018 US Open at the USTA Billie Jean King National Tennis Center on August 27, 2018 in the Flushing neighborhood of the Queens borough of New York City. Elsa/Getty Images/AFP

Admitting he struggled in tough conditions, Kevin Anderson said he was relieved to get through his first-round match at the US Open in New York on Monday night.

After winning the opening set, Anderson found himself on the back foot against American opponent Ryan Harrison, but he managed to fight back from two sets down to secure a 7-6 5-7 4-6 6-3 6-4 victory.

“It was so hot and humid, and I was losing so much fluid, it made it real tough,” Anderson said.

The South African giant, who entered the hard-court Grand Slam as the No 5 seed after reaching the final at Flushing Meadows last year, was delighted to have clawed his way back into contention.

“I try my best for every single point,” said Anderson, who set up a second-round clash with Jeremy Chardy of France on Wednesday.

“You don’t win them all but the ones you do win, like this match, make the hard work and pain definitely worth it.”

Having progressed through the qualifying rounds last week without losing a set, Harris was eliminated in a 2-6 2-6 3-6 defeat.

“I gave my best out there and wish I had more in the tank, but taking everything into consideration, I feel good and ready to make the improvements I need to make to take me to the next level,” Harris said.

Former world No 6 Wayne Ferreira, who was courtside during Harris’s match, believed his younger compatriot had the ability to climb the global ladder.

“Lloyd has an impressive game that will get him deep into the world’s top 100,” Ferreira said.

“It’s a pity his serve was not on song today and that Lloyd didn’t play aggressive, which to have any chance against Gilles you need to do.”