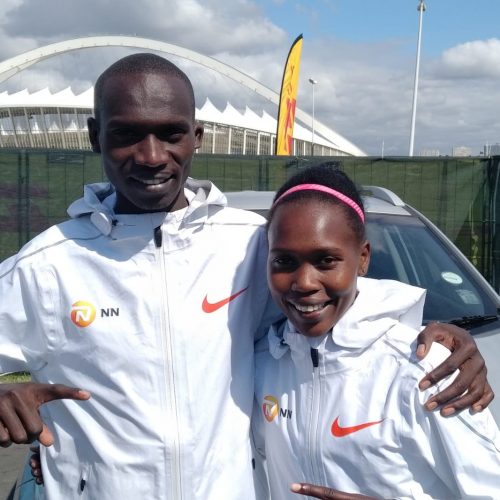 Ugandan athletes Joshua Cheptegei and Stella Chesang clocked the fastest 10km times ever run in South Africa on Sunday, storming to impressive victories at the FNB CitySurfRun in Durban.

Cheptegei covered the distance in 27:16, rocketing along the beach front to take 12 seconds off the SA all-comers’ record he set to win the inaugural edition of the race last year.

Swiss athlete Julien Wanders also took advantage of the flat, fast course to set a European record of 27:32 in second place, with the top four men dipping under 28 minutes.

Though he had not been touted among the pre-race favourites, just three weeks after winning the Cape Town Marathon, Stephen Mokoka did well to finish sixth in 28:18, as the first SA athlete across the line.

Again displaying his tremendous potential, 20-year-old prospect Ryan Mphahlele grabbed eighth spot in 28:46, finishing 15 seconds ahead of compatriot Elroy Gelant who was still on the comeback trail after recovering from a hernia operation earlier this year.

Chesang, meanwhile, took the women’s race in 31:14, shattering the 27-year-old SA all-comers’ record of 31:33 which had been held by Elana Meyer.

Local favourite Irvette van Zyl was in stunning form, taking third place in a personal best of 32:06 to clock the fastest 10km time by a South African woman in 17 years, just four months after giving birth to her second child.

Consistent performer Glenrose Xaba was fourth in 33:14, and ultra-distance specialist Gerda Steyn sharpened up for next month’s New York Marathon by finishing fifth in 33:36.