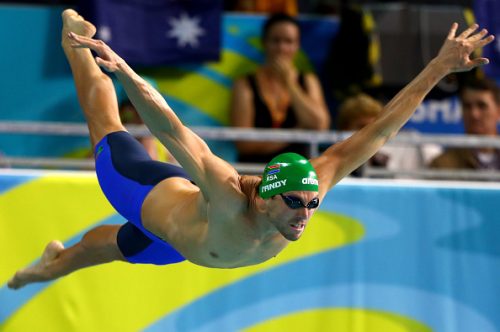 Sprinter Brad Tandy shone for the national team on Friday, earning the bronze medal in the men’s 50m freestyle final at the World Short-Course Championships in Hangzhou.

Tandy, who secured silver at the Commonwealth Games on Australia’s Gold Coast in April, added to his career medal haul by touching the wall in 20.94 seconds.

He held off Lithuanian sprinter Simonas Bilis by 0.05 to take the bottom step of the podium, raking in the SA team’s fourth medal after four days of competition at the biennial short-course showpiece Russian star Vladimir Morozov scorched his way to gold in 20.33.

In a hard-fought battle up front, the United States set a world record of 1:21.80 to win gold.

Having already pocketed gold and silver over longer distances earlier in the week, Le Clos cemented his place among the podium favourites in defence of his 50m butterfly title, clocking the second fastest time in the semifinals by winning his heat in 22.34.

Coetzee also kept his medal hopes alive in the 50m fly, grabbing a place in Saturday’s final by progressing as the eighth quickest qualifier in 22.75.

With two days of competition remaining at the global spectacle, the SA team were lying seventh in the medal standings with two gold, one silver and one bronze.

The national squad was set to be well represented on Saturday’s penultimate day of the gala.

Six SA swimmers were scheduled to turn out in the morning heats, including Le Clos in the opening round of the 100m freestyle, as well as Tandy and 100m gold medallist Cameron van der Burgh, who was set to close out his memorable career in the 50m breaststroke event.