Both winners show superior class and tactics in crossing the finish line. 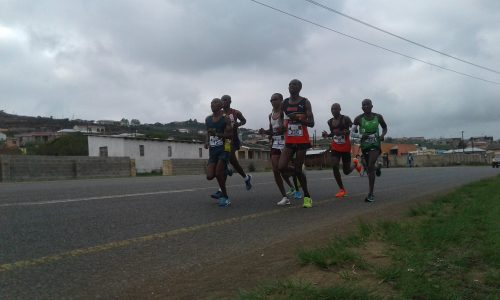 The lead group during the Heroes Marathon. Photo: Wesley Botton.

Former shorter distance specialist Bonginkosi Zwane earned his first victory over 42 kilometres on Sunday, winning a battle of attrition at the Heroes Marathon.

Taking advantage of the ideal conditions, Zwane sat back over the undulating hills across the rural landscape of the Eastern Cape, biding his time in a large group which was gradually whittled down in the second half.

After dropping the rest of his opponents in the latter stages, Zwane managed to shake off his final challenger, Ramolefi Motsieloa, in the chase for the line.

Zwane finished in 2:22:40, and while Motsieola lost some ground over the last few kilometres, he held on to take second place in 2:23:51.

“It was a tough course, but I trained hard for this race so I’m very happy with the result,” said Zwane, who received a new car for his efforts.

Silindile Gubese held off former Two Oceans ultra-marathon Lungile Gongqa in the battle for third place, completing the race in 2:27:13.

In the women’s race, Mamorallo Tjoka of Lesotho won another tightly contested battle.

The seven-time Soweto Marathon winner outclassed her opponents to secure victory in 2:57:16, just 32 seconds ahead of runner-up Makhosazana Mhlongo, with the top four women all cracking the three-hour barrier.