This is for Cameron, says Chad

South Africa's most decorated swimmer dedicates his FINA award to a man he hails as a 'great example'. 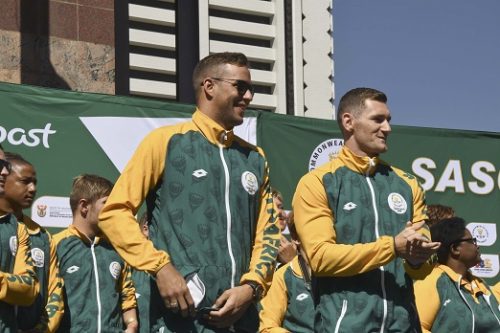 Van der Burgh closed out his career with a bang last week, securing gold medals in the 50m and 100m finals, while Le Clos raked in four medals as the duo again spearheaded the South African charge at the World Short Course Championships in Hangzhou.

After being named Fina Male Swimmer of the Year for the second time, Le Clos recognised his countryman for his contribution to the sport.

“He (Van der Burgh) is a great example for all of us, and that’s why I wanted to dedicate this award to him,” Le Clos said.

Earning gold in the 100m butterfly, along with silver in the 50m and 200m fly events and bronze in the 100m freestyle, Le Clos lifted his career tally to 15 medals at the biennial short-course showpiece.

“The field here in Hangzhou was amazing. I was racing against the best in the world,” he said.

“I could say it was like the short-course Olympics. I’ve had great races here.”

While he had not been in the hunt for the World Cup series crown earlier this season, Le Clos was pleased to showcase his form at the global championships, in the early stages of his build-up to
the 2020 Tokyo Olympics.

“It was a really great meet. Tokyo 2020 is of course my biggest focus and Hangzhou proved that from now on I can also sprint well.”

With sprinter Brad Tandy snatching bronze in the men’s 50m freestyle final, the SA team finished their campaign in Hangzhou with a total of seven medals (three gold, two silver and two bronze).

The national squad ended sixth in the standings, with the United States taking top spot in the table with 36 medals, including 17 gold.