Meet the Soweto man who rowed over 5000km 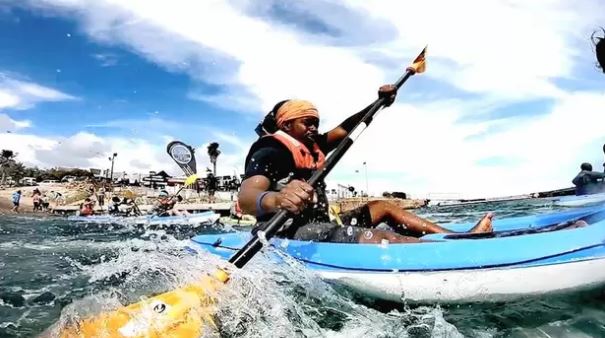 After taking some risks by diving headfirst into the most monumental physical challenge of his life, Fanafikile Lehakha says he was relieved to reach the end of his epic journey with experienced adventurer Riaan Manser.

Lehakha won a competition last year when the Soweto resident was selected from 15 000 applicants to join Manser on a seven-metre rowing boat from the Canary Islands to Barbados, a 5 500km journey which would last nearly two months.

The duo reached their destination last weekend, and while Lehakha was pleased to have received the opportunity, he admitted he was drained from the extreme effort.

“It was the hardest thing I’ve ever experienced,” Lehakha said.

“You can’t even imagine it, especially for someone like myself who hasn’t been in the ocean. It was beyond my imagination.”

Though he had never previously attempted anything similar, and couldn’t swim too well when he was unveiled as Manser’s partner, a five-day boot camp and some swimming lessons were enough to prove himself worthy of the gruelling task.

And though they faced multiple dangers in the open ocean, Lehakha admitted the toughest part of the challenge was the rowing itself.

“You have to row for hours every day,” he said.

“Sometimes who have to wake up and your knees are sore, your hands can hardly hold the oars, but still you have to do it or you’re not moving anywhere.”

Manser, meanwhile, had begun their journey with a heap of experience under his belt, having previously cycled the perimeter of the African continent and circumnavigated Madagascar in a kayak.

He had also joined wife Vasti Geldenhuys in a rowing boat between Morocco and New York in 2014.

His experience with Lehakha, however, was perhaps his most memorable thus far.

“No offence to my wife,” he joked, “but this journey has taken it to a whole new level. It was extraordinary.

“It was emotional, and I’ve been proud of all my other journeys, but this one had me choked up.”

Always gearing up for another adventure, as one of the country’s best known explorers, Manser hoped to attempt the Odyssey project again.

Next time, however, he might try a similar challenge with an inexperienced explorer from another country.

“I think we’ve got something in the Odyssey concept, so we’d love to see how we can do this internationally and give someone the opportunity again.”

For Lehakha, however, if he was to attempt another extreme challenge, it would have to be closer to home.

While he admitted the journey had changed his life, he had spent too much time from his young family and a similar task in future was unlikely.

“Riaan had told me that people wanted adventure until you gave them adventure, and I realised that as well,” Lehakha said.

“I have never been away from my family for so long, so whatever I do in future, I need to do something that doesn’t take me away from them for too long.”