SA’s fastest man wants to start 2019 with a bang

Watch out everyone, Akani Simbine is on the prowl... 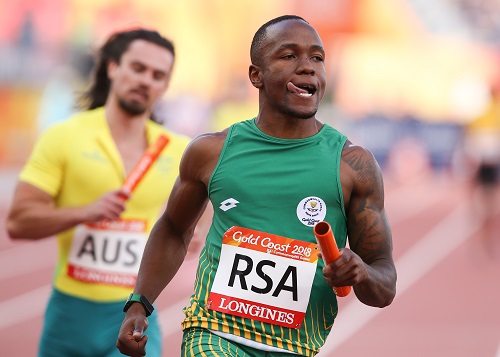 Akani Simbine of South Africa anchors his team home in the mens 4x100m relay final during the athletics on day 10 of the Gold Coast 2018 Commonwealth Games at the Carrara Stadium on April 14, 2018 in Gold Coast, Australia. (Photo by Roger Sedres/Gallo Images)

Gearing up for his first individual contest of the year on Wednesday evening, after easing into the 2019 season with a relay race last week, Akani Simbine’s coach believes South Africa’s fastest man is ready to open his campaign.

Simbine, the national 100m record holder, anchored the SA 4x100m team to a convincing win at the ASA Grand Prix meeting in Bloemfontein at the weekend.

And having previously revealed that he would put his favoured 100m event on hold throughout the domestic campaign, in order to focus on the 200m dash, he was set to compete in the men’s half-lap race at the second and final leg of the Grand Prix series in Potchefstroom this evening.

“I am happy with where we are in our training right now and the relay was a good leg loosener for him,” Simbine’s coach, Werner Prinsloo, said in a statement.

Though he was the firm favourite, Simbine was likely to be chased hard in Potchefstroom by the likes of in-form compatriot Chederick van Wyk, Sibusiso Matsenjwa of Swaziliand and Zimbabwean 100m record holder Ngoni Makusha.

Meanwhile, in other disciplines, after turning heads by scorching to a 1:44.69 personal best in Pretoria last month, middle-distance runner Tshepo Tshite was looking to go even quicker in the men’s 800m race.

Elsewhere on the track, twotime African champion Baboloki Thebe of Botswana and compatriot Christine Botlogetswe, who earned the silver medal behind Caster Semenya at the African Championships in Asaba last year, were expected to dominate the men’s and women’s 400m contests.

On the infield, African record holder Sunette Viljoen was set to spearhead the line-up in the women’s javelin throw, former Commonwealth Games champion Khotso Mokoena was in the start list for the men’s triple jump, and African champion Victor Hogan was the firm favourite in the men’s discus throw.