A great day for the veteran as Caster Semenya shows her class and Wayde van Niekerk delays his comeback. 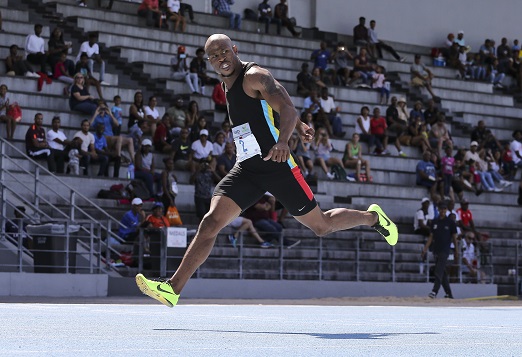 Veteran sprinter Simon Magakwe rocketed over the line in 10.05 seconds on Thursday, earning his eighth national 100m title on the opening day of the Sizwe Medical Fund and 3SixtyLife ASA Senior Track and Field Championships in Germiston.

The 32-year-old speedster clipped 0.01 off his season’s best, and though he was 0.07 outside his personal best of 9.98 which he set in 2014, Magakwe believed he could dip under 10 seconds on the international circuit.

He was hoping to compete abroad next month, as he continued his build-up to the World Championships in Doha later this year.

“I think I’m putting too much pressure on myself because people are expecting me to run under 10,” Magakwe said.

“It hits me hard because I end up thinking about it too much and then I have troubles at the start, but I think when I get to Europe it will be more peaceful and I can do it there.”

In the women’s 100m final, Tebogo Mamatu won gold in 11.45, in the absence of national record holder Carina Horn who withdrew before the heats.

Mamatu crossed the line 0.16 ahead of junior athlete Rose Xeyi who grabbed the silver medal.

Van Niekerk, who was still in the early stages of his comeback from a serious knee injury, said he had pulled out for precautionary measures due to the poor conditions.

And while Caster Semenya was apparently withdrawn from the 400m and 800m events, she opened her national championships campaign in style by breaking away from distance specialist Dom Scott-Efurd on the final lap to win the women’s 5 000m title.