‘Foreigners are helping us’ 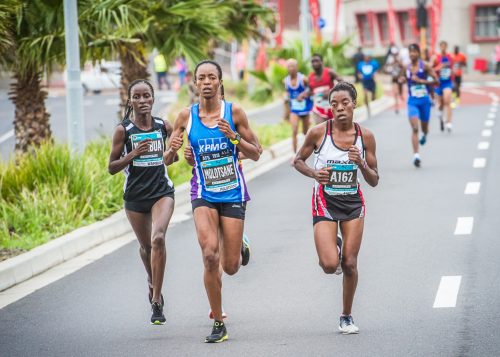 Having produced the strongest challenge of the local contingent, distance runner Kesa Molotsane (above) said she would welcome the return of the foreign elite after international athletes dominated the opening leg of the Spar Women’s Grand Prix 10km series at the weekend.

In-form Namibian Helalia Johannes brushed off the windy conditions to secure a commanding victory, setting a course record of 31:50.

Defending champion Molotsane was third in 33:09, just 10 sec outside her personal best.

While the series organisers and the Nedbank Running Club had been criticised on social media for denying local athletes prize money in the lucrative annual Grand Prix campaign by introducing world-class foreign opponents, Molotsane believed the visitors had helped to lift the domestic standard.

“Racing against athletes of this calibre is good for our country and we are going to improve if we align ourselves with such a good group of athletes,” said Molotsane, who turned out for the Murray & Roberts Running Club.

“Last year I won this race, but not with the time I ran today, so they’re helping us run faster times.”

After making an early break alongside Ethiopian teenager Tadu Teshome Nare and local contender Irvette van Zyl, Johannes put in a surge shortly before halfway and dropped the South African.

With only Nare able to hold on as she wound up the pace, Johannes kicked again at the 7km mark and stormed home, covering the last 3km in 8:46 and breaking her own Namibian national record. Nare finished second in 32:38. And though she lost touch in the second half, Van Zyl fought hard to finish fifth in 33:39, just two weeks after making her ultra-marathon debut.

There was also tremendous depth further back in the results, with 23 women dipping under 36 minutes as the foreign contingent dragged the rest of the field to quick times.