Schoenmaker makes history in the pool for SA

It's another medal for Mzansi at the world championships, but this one is a hugely significant one. 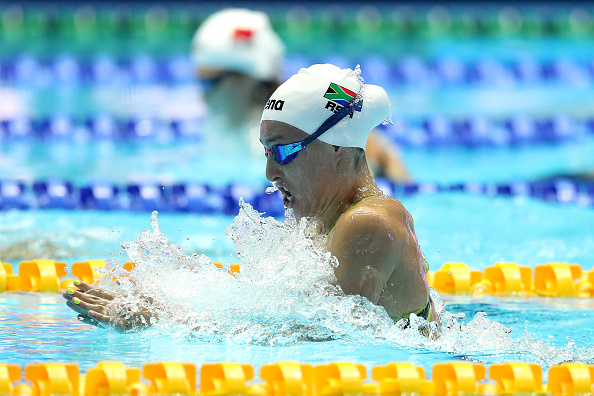 Tatjana Schoenmaker made history on Friday, securing the silver medal in the women’s 200m breaststroke final at the Fina World Championships in Gwangju.

After going out hard, Schoenmaker faded over the second length, but she fought back to grab second place in 2:22.52.

The 22-year-old swimmer, who had set an African record of 2:21.79 in the semifinals the day before, became the first South African woman to earn a World Championships medal in the long-course format.

Her compatriot, Kaylene Corbett, took eighth place in 2:26.62, while Russian star Yuliya Efimova stormed to a commanding victory in 2:20.17.

“I definitely felt much more tired than I did yesterday (in the semifinals) when I was more relaxed, but that’s no excuse,” Schoenmaker said.

“It’s not my best time but luckily I still got silver.

“I was already happy after the semis, and if I had to leave the competition then I would have been completely thrilled, so I’m super happy.”

Schoenmaker scooped the nation’s second medal of the showpiece, after Chad le Clos had taken bronze in the men’s 200m butterfly final earlier in the week.

Having finished sixth in the 100m breaststroke a few days earlier, Schoenmaker said she wanted to make further inroads over the shorter distance, but she was satisfied with her results.

“In the 100m you can lose a few split seconds and you’re eighth, but in the 200m there is more time to control your race,” she said.

“I definitely want to try and improve my 100m but I’m definitely happy with what I got from this competition.”

Le Clos, meanwhile, was set to chase another podium spot on Saturday in the 200m butterfly final.

Though he was well outside the African record he set to win the world title in Kazan four years ago, Le Clos clocked 51.40 seconds in Friday’s semifinals to qualify fourth fastest for the medal battle.

“It was very slow, a bad race. I’m not sure what happened,” Le Clos said.

“I’m excited for tomorrow and I’m hoping to have a good race. We’ll see how we go.”