The Bafana coach on Friday announced his departure with immediate effect despite still having three more years to his contract. 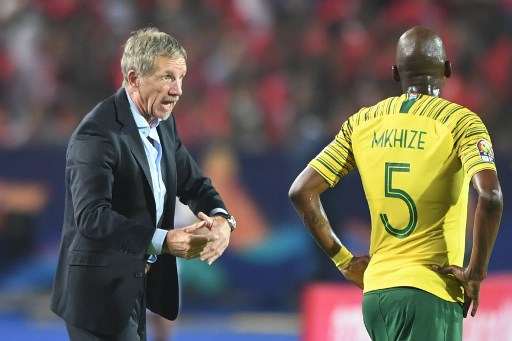 South Africa's coach Stuart Baxter (L) speaks to South Africa's defender Thamsanqa Mkhize during the 2019 Africa Cup of Nations (CAN) Round of 16 football match between Egypt and South Africa at the Cairo International Stadium in the Egyptian Capital on July 6, 2019. (Photo by OZAN KOSE / AFP)

Baxter was handed a five-year contract until June 2022 with the mandate of guiding Bafana Bafana to the 2022 Soccer World Cup in Qatar.

However, Baxter announced his departure with immediate effect despite still having three more years to his contract.

He stated that he “cannot continue to work with the required professionalism and passion as I have done”, and that the Englishman had to deal with “many issues involved with this programme”.

The 65-year-old leaves the position having won eight of his 21 fixtures in charge.

Baxter’s final game in charge was Bafana’s quarterfinal loss to Nigeria at the African Cup of Nations in Egypt last month.

Safa released a statement wishing Baxter well for his future:

“SAFA has taken note of the resignation tendered by Bafana Bafana head coach Stuart Baxter, earlier this morning and wishes to thank him for his services.

“We would like to thank the coach for helping us build the Bafana Bafana team to where it is today, having come off the back of a good run leading up to the 2019 AFCON finals in Egypt where the team bowed out in the quarter-finals.

“In addition to this, the coach was at the forefront of supporting and implementing our Vision 2022 by bringing in younger players into Senior National set-up. As we prepare to regroup for AFCON 2021 qualifiers and the World Cup 2022, the team is in good stead with a very balanced squad of players.

“By qualifying for the last eight in AFCON Egypt 2019, coach Baxter accomplished something that was last achieved in 2002 away from home. Bafana Bafana reached the quarter-finals on home soil in 2013 before losing to Mali 3-1 on penalties.

“In addition, the coach’s commitment to support Vision 2022, is further evidenced by his support to all the other National Teams structures during his tenure, and with his unwavering support to these teams and their coaches, helped all national teams to consistently qualify for the various major tournaments both on the continent and the world.

“We take this opportunity to once again thank coach Baxter for his services, and wish him well in his new ventures – wherever this may take him, and we look forward to collaborating with him if and when the opportunity presents itself. ”