Hanuma Vihari and Ravi Ashwin faced 256 balls and scored just 62 runs, helping steer their team to 334 for five and safety at the close. 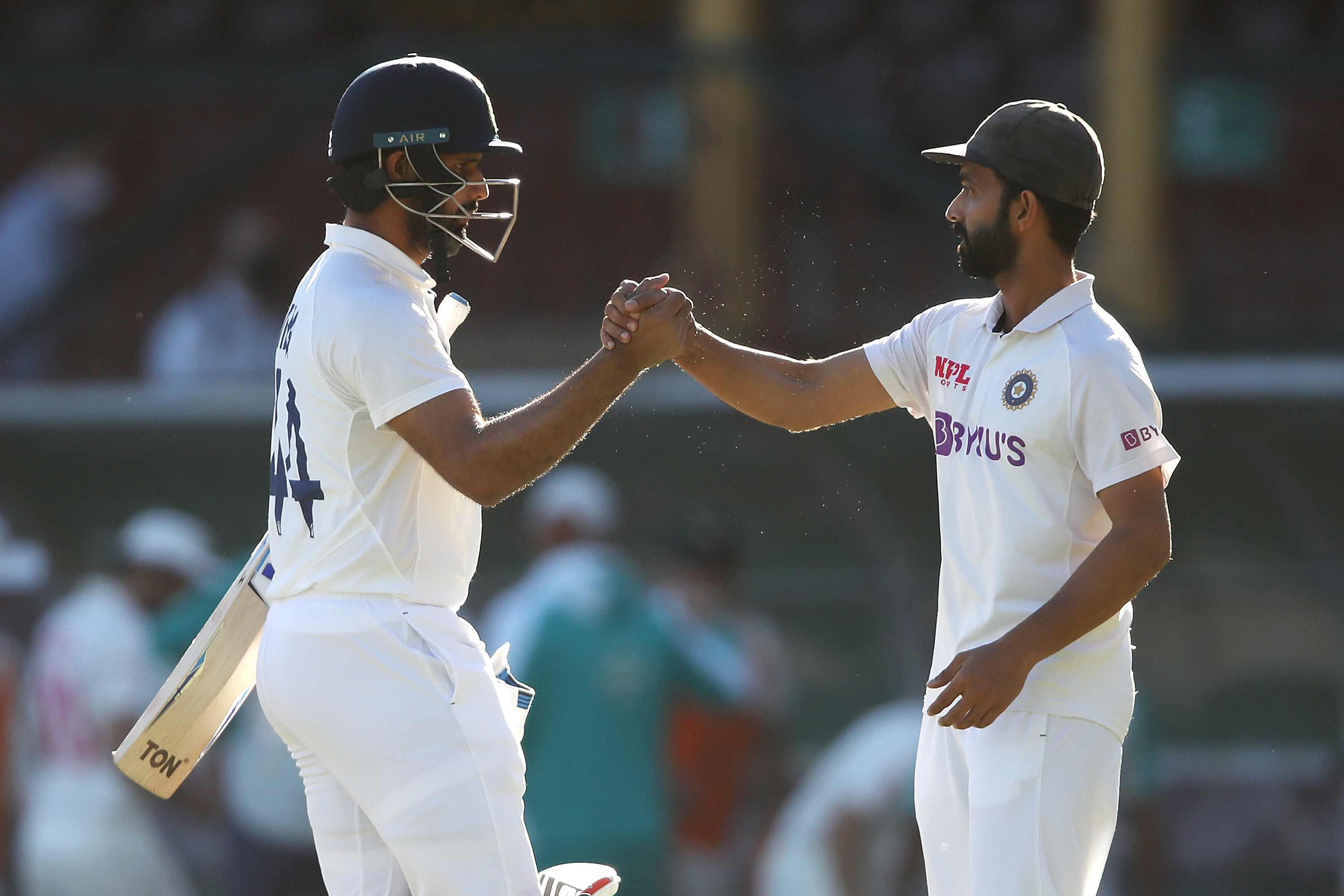 Hanuma Vihari shakes hands with his captain Ajinkya Rahane of India following the draw with Australia in the third Test in Sydney on Monday. Picture: Getty Images

India skipper Ajinkya Rahane hailed his team’s character Monday after they clung on for an unlikely draw in the third Test against Australia, saying the result felt like a win.

Few gave India much chance when they began the day at 98-2, having lost openers Shubman Gill and Rohit Sharma the previous afternoon and facing one of the world’s leading attacks.

And when Rahane fell without adding to his overnight four in Monday’s second over, the odds were even worse with another 309 runs needed to win.

But they battled hard as Rishabh Pant smashed a high-class 97 and the stoic Cheteshwar Pujara ground out 77.

When that pair fell Hanuma Vihari, nursing a hamstring injury, survived 161 balls for 23 runs and Ravi Ashwin, who had treatment on his ribs, made 39.

The pair faced 256 balls and scored just 62 runs, helping steer India to 334 for five and safety at the close. The four-Test series stands at 1-1 ahead of the final game in Brisbane.

“This was as good as winning a Test match,” said Rahane. “When you come abroad and play a match like this, it was really special, as good as a victory.”

What satisfied him most was the fight his team showed.

“Our talk coming into this morning was to show character and fight till the end. Not to think about the result,” he said.

“So really happy with the way we fought especially today but also throughout the game, even in the first innings when Australia were 200 for two and getting them all out for 338 was really good.”

The resilience shown by Vihari and Ashwin, coupled with Pant’s fireworks, were major pluses for Rahane, particularly after the captain fell cheaply.

Pant was moved up to to number five ahead of Vihari to have the left-right combination with Pujara, a tactic that paid dividends.

“We had that strategy and it paid off. Credit to him (Pant) going out at five, the way he counter-attacked, the way he managed his innings throughout the day was really good to see.

“We know he can win a game for us from any situation, we have that belief and I think he is improving.”

“And Vihari was batting really well. The last few Test matches, unfortunately he hasn’t been able to get those big scores,” Rahane added.

“But today, that knock was really special. To show that motivation, to show that hunger, to hang in there for your team was really good and that’s what we want from each and every individual — to show that character on the field.”