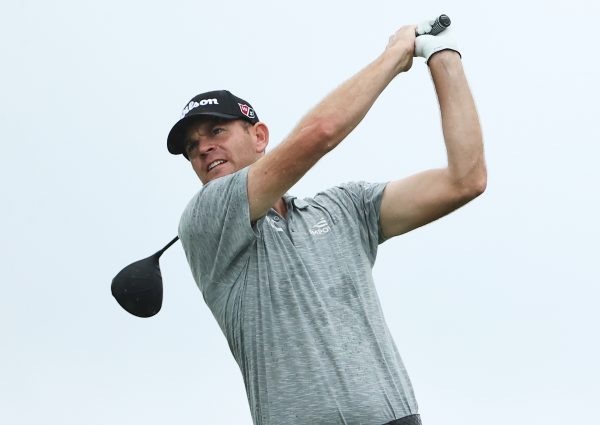 Brendan Steele of the United States takes a shot off the tee. Picture: Getty Images

Brendan Steele birdied three of the last four holes on the front and back nines to shoot a nine-under par 61 and seize a two-stroke lead after Saturday’s third round of the PGA Sony Open.

The 37-year-old American, last year’s Sony Open runner-up, finished 54 holes at Waialae Country Club in Honolulu on 18-under 192 after a bogey-free round.

World number 114 Steele said he wants to play just as he did in last year’s final round even though he lost to Australian Cameron Smith.

“I’d like to do the exact same thing again tomorrow and hopefully it’s good enough,” he said.

South Korean-born American Kevin Na matched the low round of his career with a 61 to share second on 194 with Chile’s Joaquin Niemann, who eagled the par-5 18th to leap over Americans Peter Malnati, Russell Henley, Chris Kirk, Stewart Cink and Charley Hoffman on 195.

“I usually play well coming off a break and I had a good time off with my family,” Steele said. “I get here and I’m very excited to play and about my game.”

Na holed a birdie putt from just inside 44 feet at the par-3 fourth, eagled the par-5 ninth on an eight-foot putt, reeled off four birdies in a row starting at the par-3 11th and closed with a six-foot birdie putt.

“I played fantastic,” Na said. “My ball striking was great.

“If I can make some momentum putts tomorrow, I think I’ll be all right.”

Na grumbled about a seven-foot birdie miss at the par-3 17th as he chased an elusive 59.

“The fact I had an outside look at a magic number, 59, was exciting,” he said. “When I missed that putt on 17, I was so disappointed… because you can definitely eagle the last hole.”

“The golf course is so gettable that somebody can go shoot 8- or 9-under,” Na said. “I’m in a good position but it’s what you shoot Sunday. I’m still going to need a low one tomorrow. I might need maybe six more (birdies) tomorrow.”

Niemann’s bogey-free round included five birdies, the last at 17 after dropping his approach three feet from the cup, and a closing 10-foot eagle putt.

“It was huge,” Niemann said of his finish. “I wasn’t really satisfied on my first 16 holes. I thought I was playing great. I thought I could put myself in a better position.

“And then finishing that way and making eagle on 18 made me really happy and gave me a bit of motivation for tomorrow.”