Social media exploded with critics who watched the scene and called for a penalty on the 30-year-old American. 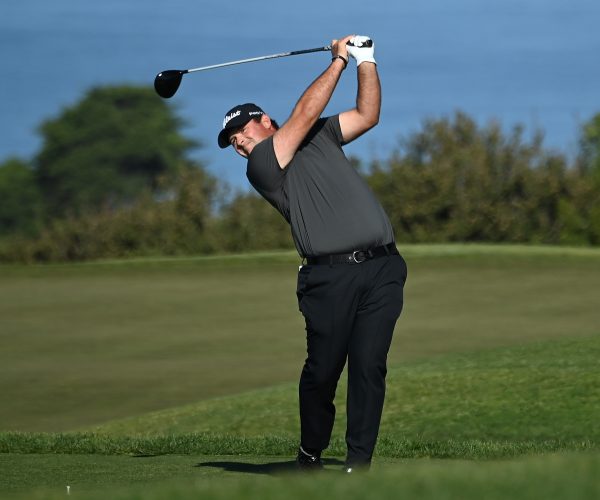 Patrick Reed plays his tee shot on the second hole during the third round at Torrey Pines. Picture: Gallo Images

Co-leader Patrick Reed was embroiled in a rules controversy over what was deemed an embedded ball in Saturday’s third round of the US PGA Farmers Insurance Open.

The 2018 Masters champion fired a two-under par 70 to match Mexico’s Carlos Ortiz, who posted the day’s low round of 66, on 10-under par 206 after 54 holes at Torrey Pines north of San Diego.

But overshadowing the day’s action was Reed’s second shot at the par-4 10th hole and the aftermath of what PGA rules officials declared were proper actions on his part.

World number 11 Reed owned a four-stroke lead when his shot landed in the left rough, bounced once and settled in the deep grass. But neither Reed, his playing partners, their caddies or a volunteer near the landing area had seen the ball bounce.

When Reed arrived at the ball, he treated it as a potentially embedded ball, lifted it and felt an indention in the ground, then called over a rules official who ruled it was indeed an embedded ball and gave him a free drop, setting up a 14-foot par-saving putt.

“Whenever we’re taking relief, we check to see if it’s embedded,” Reed said. “When I marked the ball, I lifted the ball and I put my finger down there. There was a lip on both sides. It had broken the plane (of the ground) so there was relief.”

Social media exploded with critics who watched the scene and called for a penalty on the 30-year-old American.

“It’s an unfortunate situation at the end of the day,” Reed said.

Reed would bogey four of the next six holes but sink an eight-foot birdie putt at the par-5 18th to share the lead with Ortiz.

Rules officials did go over video of the incident at the 10th with Reed before he emerged from the scorers’ tent, but they also said he had acted properly given he thought the ball had landed where it did on the fly.

Reed said they told him everything he did was “textbook” for the situation.

“It was reasonable to conclude it was his pitchmark and it was embedded,” said senior tournament director John Mutch. “The player is entitled to do that (lift the ball out). He did nothing wrong. He marked it, lifted it and called for a ruling.”

Reed said he would have done nothing differently knowing only what he knew then.

“I feel fine. I feel great,” he said. “I did everything I was supposed to do. And I feel even better making birdie at the last.”

It’s far from the first cheating accusation Reed has faced since his college days, claims he has vehemently denied.

At the 2019 Hero World Challenge, tournament leader Reed twice moved sand behind his ball in a waste area. Reed said he saw no movement but television cameras caught an improved lie and he was issued a two-stroke penalty.

Reed said he feels he gets more scrutiny from viewers over calls than other players.

“Definitely,” he said. “It’s an unfortunate thing that happened today but it’s exactly what I should do. That’s all you can do. When you’re out there playing, you can’t see everything.

“The great thing is I still have a chance to win a golf tournament.”

“(I need to) just continue doing what I’m doing, make solid contact into the greens and make the putter do the work,” Reed said.

Ortiz’s late charge left him in the clubhouse well before Reed was done.

“I drove it really nice. Hit some great shots into the par-3s,” Ortiz said. “It was just one of those days when everything was working. It was nice.”

Four-time major winner Rory McIlroy was in a pack on 209.