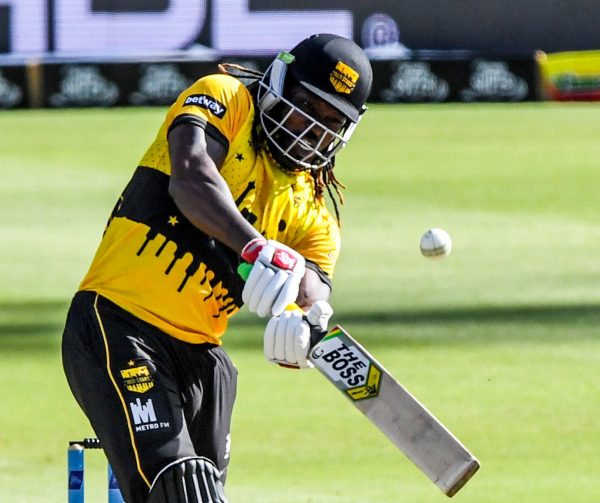 Chris Gayle in action for the Jozi Stars during the Mzansi Super League in Johannesburg in November 2019. Picture: Gallo Images

Self-proclaimed “universe boss” Chris Gayle will help ring in the sixth edition of the Pakistan Super League in Karachi on Saturday, with spectators returning to stadiums for the first time in a year.

The West Indies batsman headlines a slimmer roster of international cricketers joining the Twenty20 league in the wake of the Covid-19 pandemic.

Gayle will be suiting up with the Quetta Gladiators against title holders Karachi for his first T20 appearance on Pakistani soil.

“The universe boss is here in Pakistan alright,” he said in a video message released by the team.

“All my Pakistan fans, I am looking forward to entertaining you… so stay tuned.”

Gayle plays three matches before returning home for a series against Sri Lanka, returning for the last leg of the tournament taking place in Karachi and Lahore through to March 22.

Despite being the highest scorer in Twenty20 cricket with 13,584 runs, Gayle stumbled in his first two PSL competitions.

He managed just 103 runs in five matches for the Lahore Qalandars and 160 in nine for the Karachi Kings the next year.

England will be represented by James Vince, Tom Banton and Adam Lyth among others.

The Pakistan Cricket Board (PCB) will only allow stadiums to be filled to 20 percent capacity during the competition as part of coronavirus precautions.

But it is holding out hope that health officials will consider allowing more fans to attend the play-offs.

Last year four league games were held in Karachi and Lahore without spectators before the play-offs were cancelled after English batsman Alex Hales revealed symptoms of the virus.

The remainder of the season was rescheduled, with three play-offs and a final held without fans.

This year’s season marks the second time all games will be entirely hosted within the cricket-mad country.

Previous editions were held wholly or partially in the United Arab Emirates over security fears.