Windies destroyer Lungi Ngidi: ‘My Test spot was in doubt’

The South Africans are in charge after day one in St Lucia thanks to a quality bowling display led by Ngidi and Nortje. 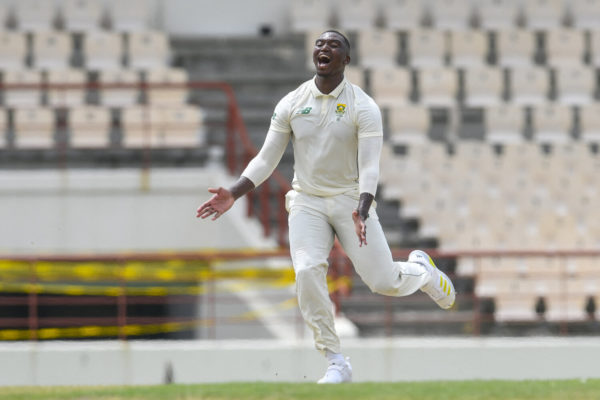 Lungi Ngidi of South Africa was in fine form with the ball on the first day of the first Test against the West Indies as he took five wickets. Picture: Randy Brooks / AFP

Lungi Ngidi exploited a pitch with some life in it in superb style on the opening day of the first Test against the West Indies at St Lucia on Thursday, taking five for 19 in 13.5 overs as the hosts were bundled out for their lowest ever total against South Africa – a dismal 97 all out.

While the pitch continued to provide movement and there was swing in the air all through the first day, it was tremendous discipline and the many hours of skills work that Ngidi has been putting in that financed his first five-wicket haul in an innings since he took six for 39 on debut against India in January 2018.

Ngidi, like all the South African fast bowlers, bowled a superb line, sticking consistently to the channel just outside off stump, and his length was also excellent. It meant that the West Indies batsmen were unable to score easily and, with the movement on offer, any expansive strokeplay outside off-stump was very risky.

“You were never really in as a batsman, but it felt good to get a five-for because it’s been a long time since I got one,” said Ngidi, who took five for nine in 6.5 overs in the second session.

“My Test spot was in doubt and it’s still a work in progress, but behind the scenes I’ve had to work very hard on my fitness and in the gym, but the most important thing was working on my skill. To be able to swing the ball away from the batsman now has been very useful.

“You can get carried away when there’s nip and swing, but my role-definition is very clear – my job was to keep one end quiet, not give them anything. I just tried to zone in on off-stump and I felt more comfortable after lunch, my rhythm clicked in the afternoon and I love the Dukes ball because it seems to still swing after a long time.”

Anrich Nortje was the co-conspirator in the rout of the West Indies, bowling superbly in the morning session as he took three for eight in six overs and finished with four for 35 in 11.

Ngidi, employing more subtle skills than the fast and furious Nortje, said the focus of the South African attack was to work together as a unit, something they certainly achieved.

“I’ve been working a lot together with Anrich, pretty much being trying to hunt together with him. To see him take on the top-order like he did was what we hoped for and he got us off to the perfect start. I just tried to keep applying pressure. Kagiso Rabada really had them under pressure as well, which should not go unnoticed.

“Hunting together is what we’re trying to restore as a bowling unit and we’ve made the perfect start to this series,” Ngidi said.

At the close of play, South Africa were 128 for four, after Aiden Markram had hit a superb 60. Rassie van der Dussen was 34 not out.