Wing sensation Caleb Clarke has opted out of the Tests to chase Olympic glory with New Zealand's sevens team in Tokyo. 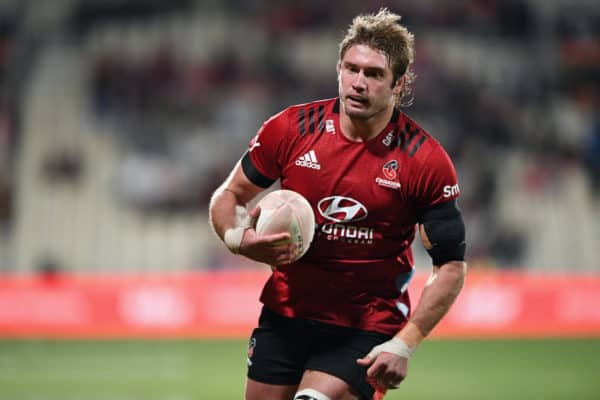 Loose forward Ethan Blackadder is one of the new players in the All Blacks squad. Picture: Kai Schwoerer/Getty Images

All Blacks selectors on Monday named four new players in the squad for upcoming Tests against Tonga and Fiji as they look to experiment and regain the world number one ranking.

Coach Ian Foster also recalled Luke Jacobson and Angus Ta’avao to the forward pack, along with centres David Havili and Braydon Ennor, while towering lock Brodie Retallick returns from a stint in Japan.

Lock Sam Whitelock was named captain in the absence of regular skipper Sam Cane, who is recovering from an operation on his pectoral muscle.

Wing sensation Caleb Clarke has opted out of the Tests to chase Olympic glory with New Zealand’s sevens team in Tokyo.

The All Blacks hope to play a 15-Test schedule this year, including hosting Tonga and Fiji this month, the Rugby Championship and a northern hemisphere tour.

Foster said the busy schedule was a chance to experiment after last year’s fixture list was cut back because of the coronavirus pandemic.

“We’ve actually got a year that we can plan a programme of development,” he said.

“Because there was a limited number of Tests last year, we didn’t try to expand our game too much but this year we need to grow that.”

While World Cup triumph is the ultimate aim, Foster said the All Blacks also wanted to retain the number one ranking they held for a decade before losing it last year.

“That’s what we want, we haven’t been there for a while now,” said Foster, whose team is currently ranked second behind world champions South Africa.

“Everything we do is about chasing that — how do we get there? Basically hard work and a real commitment to preparation through the group.”