"His timing is great, the way he hits the line, so it was a pretty special day for him," said Warren Gatland. 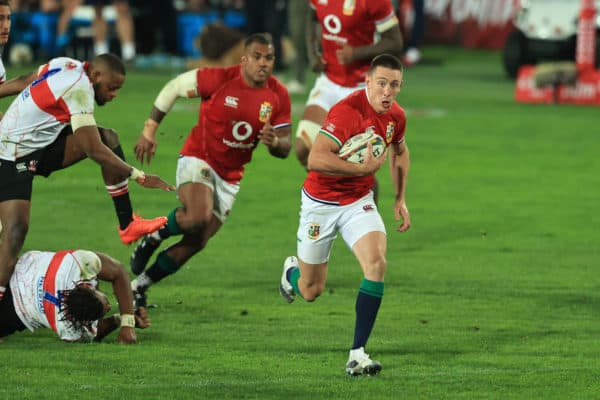 British and Irish Lions wing Josh Adams on his way to one of the four tries he scored against Joburg's Lions on Saturday. Picture: David Rogers/Getty Images

While coach Warren Gatland says he isn’t even thinking about his possible Test side just yet, one player who must already have a good number of ticks behind his name is winger Josh Adams.

The 26-year-old from Wales has scored five tries in his two British and Irish Lions outings to date in 2021 – four of them coming against Joburg’s Lions in the tourists’ 56-14 win at Ellis Park on Saturday.

Adams also scored a try in the Lions’ pre-tour match against Japan in Edinburgh on 26 June.

While the Welshman conceded he had “one or two walk-ins” against the Joburg side, he said getting the tour off to a good start was important.

“It feels great; it was a good start,” he said afterwards. “I didn’t have to do too much for one or two of the tries, so I can’t take too much credit.

“But, you still have to be in the right place. If you keep working hard and doing what is asked of you, good things can happen.”

Adams compared his role in the team to that of a striker in football.

“A striker is there to score goals; in rugby a winger has to score tries. There are of course other aspects that are important, but obviously when you get on a run you must keep it going.”

Gatland was understandably pleased with his team’s performance.

“I can’t complain. I suppose we’ve put down a bit of a marker now, even though there are lots of things to work on,” Gatland said.

“I was pleased with the energy and enthusiasm of the guys, so it was a positive start.”

About Adams’ four tries, Gatland said: “He knows where the tryline is, and we can’t ignore what he has achieved (at club level and for Wales). His timing is great, the way he hits the line, so it was a pretty special day for him.

“But I’m not thinking about the Test team just yet. There’s a lot of competition in the squad and that’s pleasing. I’m going to keep and open mind and let things unfold.”

With just the one game in South Africa behind them and four to play before the first Test against the Springboks, Adams wasn’t getting ahead of himself.

“With so few warm-up games you have to make the most of every opportunity,” he said.

“You need to make a statement and take your chances. There are still a few games to come and other players will also get a chance.”

All the Lions players had Sunday off, with their next game on Wednesday against the Sharks at Ellis Park.