Move it or lose it? Covid crisis puts Lions tour in doubt

The Springbok camp has also been hit by Covid, with 12 positive cases, including head coach Jacques Nienaber. 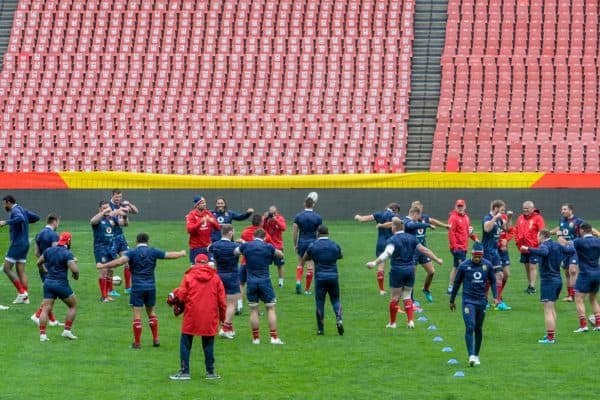 There is concern about the tour by the British and Irish Lions following several positive Covid cases in the tourists' squad, as well as in the Springbok squad. Picture: Sydney Seshibedi/Gallo Images

Covid hit the British and Irish Lions camp on Wednesday in what may well be the tipping point that sees the entire tour moved to Cape Town or called off completely.

The Lions confirmed on Wednesday that a member of their management team and a player had tested positive and had gone into isolation, as had 12 close contacts, including eight players.

The entire touring party was then tested again and for several hours the match against the Sharks in Johannesburg on Wednesday night hung in the balance.

It was eventually played, but the fact that the virus penetrated the meticulously assembled Lions bubble is of grave concern and the entire series must now be in danger of being called off.

The glimmer of hope that the organisers are no doubt hanging on to is that the tourists, with their weekend game against the Bulls in Pretoria already postponed, can now head to Cape Town where the number of Covid cases is much lower.

The Lions are scheduled to play the SA A team at the Cape Town Stadium next Wednesday and their only remaining fixtures in Gauteng are the last two Tests, though it now seems likely those will be moved to the Cape as well.

Quite who the hosts are going to be able to field in that SA A match and in the three Tests that start on July 24 is difficult to know.

The Springbok camp has been hard-hit by Covid with 12 positive cases, including head coach Jacques Nienaber.

There are currently seven Bok players who are in isolation, and with this weekend’s second Test against Georgia at Ellis Park now cancelled, questions are being asked about what sort of preparation the Springboks will have before taking on the might of the Lions.

SA director of rugby Rassie Erasmus may be forced into a situation where the SA A game, which was meant to be for the second-string South African side to take on the Lions, is now where the first-choice Springbok line-up has to play in order to get some game-time together before the Test series. Which would be most unfortunate for the fringe players in the national squad.

The Lions are also concerned about their preparation for the series bring disrupted and have reportedly been trying to find some opposition to replace the Bulls over the weekend. Georgia announced on Wednesday that they have half-a-dozen Covid cases in their camp as well, which is why they cannot stand in.

All rugby fans will be hoping that if the whole series moves to Cape Town, the situation will normalise and sport, rather than the ongoing pandemic, can take centre stage again.