The shadow Springbok team were in action for the first time since facing Georgia in a one-off Test almost two weeks ago. 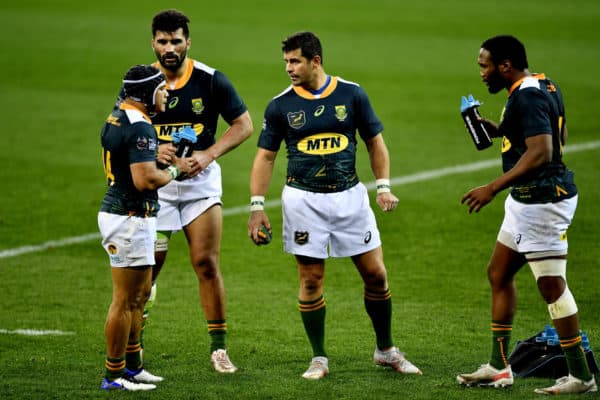 SA A players Cheslin Kolbe, Damian de Allende, Morne Steyn and Lukhanyo Am discuss something during their match against the touring Lions in Cape Town on Wednesday. Picture: Ashley Vlotman/Gallo Images

Rassie Erasmus, who coached the South Africa ‘A’ side that defeated the British & Irish Lions 17-13 in Cape Town on Wednesday, said his players ran out of steam, but never out of heart which proved decisive in a match they desperately wanted to win.

SA Rugby’s Director of Rugby addressed the media in a virtual press conference with SA ‘A’ captain Lukhanyo Am and said the match turned out as they expected.

“We expected our guys to run out of steam at the end after being stuck in our hotel rooms for a week and we only had two training sessions together as a team,” said Erasmus.

“The two yellow cards also certainly did not help our cause in that regard.”

Erasmus described the match, where SA ‘A’ held a 17-3 lead at the break, as “very intense, maybe not brilliant, but one where a lot of players showed massive guts and endeavour.

“That type of performance will not win us the Test series though, there is a lot of technical stuff we need to get right before next weekend.

“We also got from the Lions what we expected. Their physical approach and slick handling were expected, and they did not disappoint.

“That is exactly what we needed with a week to go before the first Test. We wanted to win this match and I am sure they wanted to as well. Maybe those two tries not given would have counted for them, but it worked in our favour tonight.”

Erasmus said he is pleased that a big chunk of the squad will return from isolation in Johannesburg in the coming days, especially Springbok head coach, Jacques Nienaber.

“Jacques is also the defence coach and this week he was coaching us virtually, so the way our guys responded was great,” said Erasmus.

“A number of players need some game time, but we will address that, as well as how to bring the COVID cases back in and manage their return to play.”

Am said it was a special occasion leading the team and it delivered a great result, while he was also full of praise for the performance of Cheslin Kolbe, who had a massive contribution in his try late in the first half.

“There are lots of leaders in the team and that made my job easy, while I thought Cheslin was outstanding,” said Am.

“He brings so much energy and class to our team. He is a key performer and showed why. He covered so many positions today, it’s great to have him in the team.”

An injury update will be provided later, but Willie le Roux (fullback) and Jasper Wiese (No 8) picked up strains during the game.