All Blacks harden up for physical battle against Fiji

Anton Lienert-Brown returns from injury for his 50th Test. 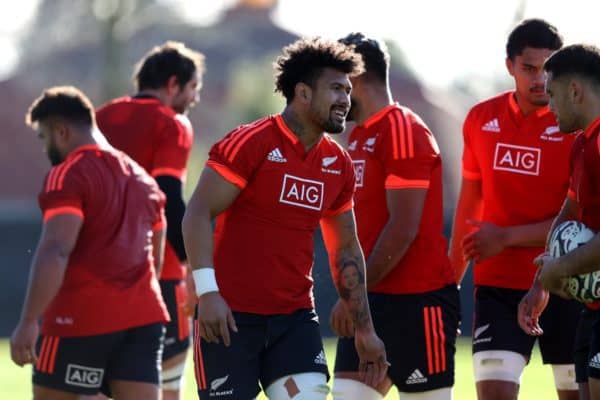 An injury-free All Blacks hardman Ardie Savea will lead a revamped loose trio intent on winning the physical showdown with Fiji in the second Test in Hamilton on Saturday.

Savea is joined by Luke Jacobson and Akira Ioane in the pack named Thursday, while Richie Mo’unga has reclaimed the fly-half role to give the All Blacks’ attack better direction.

New Zealand were widely criticised for their performance in the first Test last weekend against Fiji even though they won 57-23.

The score masked the fact that until Fiji ran out of steam with 20 minutes remaining, the All Blacks were clinging to an eight-point lead and losing the battle at the breakdown.

Savea, who had been sidelined by a knee injury, said that has to change.

“We’re a physical team too, and we want to go out there and stamp our mark as well,” he said.

“It’s about our ball carriers doing a job and our cleaners being able to be in there and not giving them an opportunity to get over the ball.”

Jacobson, who was rested last week after a strong performance in the All Blacks’ season opener against Tonga, said a bruising encounter was what he wanted.

“I’m really looking forward to it. I enjoy those physical match ups,” he said.

“There’s been a bit of chat around the breakdown, Fiji did do pretty well in that area last week, but we’ve but spent a bit of time on it this week.”

The other significant changes in the team are the return of Anton Lienert-Brown from injury for his 50th Test and to add experience to the backline, and Mo’unga edging Beauden Barrett out of the 10 jersey.

Coach Ian Foster said that in addition to a more physical forward presence, the All Blacks also needed a sharper attack.

“How we carry the ball and how we recycle the ball is going to be really important but the danger is we don’t want to get into a purely retaining mode,” he said.

“We still want to attack… I’d like to see a slight improvement in some of our running lines, particularly the counter-attack stuff where I felt we’ve been just a little bit lateral.”

The starting front row is unchanged, with Codie Taylor and props George Bower and Nepo Laulala with Dane Coles, who swung the match last week with four tries, again coming off the bench.

Samuel Whitelock returns to captain the side at lock and will partner Scott Barrett.

Aaron Smith teams up with Mo’unga in the halves and David Havili, who straightened the line well in the first Test, joins Lienert-Brown in the midfield with Will Jordan, Sevu Reece and Damian McKenzie forming the back three.

Meanwhile, Fiji’s influential captain Levani Botia has been forced out of the match because of injury, with lock Leone Nakarawa elevated to lead the side.

Botia, who is nicknamed “Demolition Man” and plays for French club La Rochelle, had not recovered from a knee injury suffered earlier in the week, coach Vern Cotter said when naming his side Thursday.

Riko Buliruarua, who plays for Brive in France, replaces Botia and will partner Waisea Nayacalegu in the centres.

Other changes in the backline see Frank Lomani coming in at scrum-half with Setareki Tuicuvu starting on the right-wing ahead of Eroni Sau.

In the one change to the forward pack that troubled the All Blacks for much of the first Test, Peceli Yato takes over from Albert Tuisue at the back of the scrum.