Chebet won in two hours, six minutes and 51 seconds to top the first all-Kenyan podium since 2012. 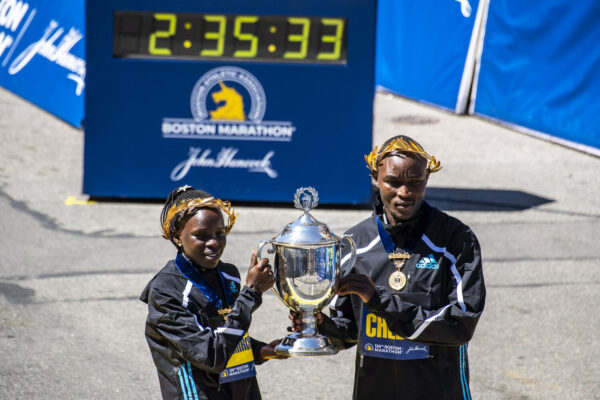 Peres Jepchirchir and Evans Chebet hold the victory trophy over the finish line after both took first place in their divisions in the 126th Boston Marathon in Boston, Massachusetts on Monday. Picture: Joseph Prezioso / AFP

“I’m extremely proud,” Chebet said through a translator. “I knew I had it in my legs to win.”

Jepchirchir, last year’s New York Marathon champion, won her Boston debut by edging Ethiopia’s Ababel Yeshaneh in the final strides, taking her fifth victory in a row since 2019 in 2:21:01.

That was good enough to defeat Yeshaneh by four seconds with Kenya’s Mary Ngugi third in 2:21:32.

As they battled into the final mile, Jepchirchir made three pass attempts but Yeshaneh countered each. The Kenyan made her final move down the stretch and surged in the last 100 meters for the triumph.

“I just believed in myself. I usually have hope. When you see the tape for finishing, that’s when the strength comes.”

“It means a lot to me,” she said. “I believe in myself more. I still have more victories to come.”

The famed 26.2-mile race returned to its traditional date on the third Monday in April after being canceled in 2020 and contested in October last year due to Covid-19 concerns.

A full field of 30,000 competitors took part with Covid-19 vaccinations required for entry into the event.

A lead pack of about 20 men reached the halfway mark together and 15 remained tight at the front through 21 miles, with Chebet, who didn’t finish in 2018 in his only other Boston start, making his move just after that with a 4:27 mile.

By mile 23 he had left behind the field, but Cherono and Kipruto kept the pressure on Chebet into the final stretch.

On the women’s side, former Boston, London and New York champion Edna Kiplagat of Kenya was fourth in 2:21:40 while 2021 London winner Joyciline Jepkosgei of Kenya was seventh.

Jepchirchir and Jepkosgei pushed the pace on a climb after half an hour to trim the lead pack to about a dozen and after a few miles the only rival with them was Yeshaneh, a 2019 Chicago runner-up and former world half-marathon record holder.