Also in good form was Wayde van Niekerk, the Olympic 400m champion, who qualified for the men's 200m final, which will be run on Saturday. 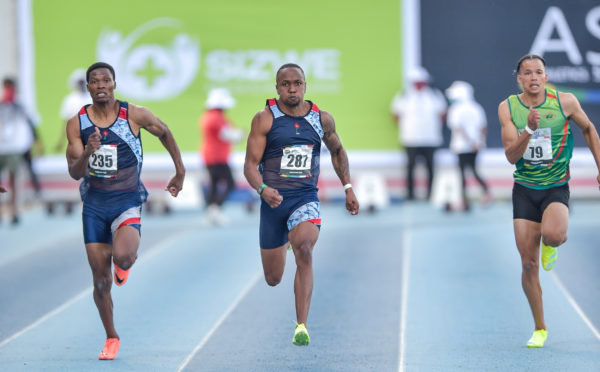 Akani Simbine says he is ready to deliver the season of his career after winning the national 100m title on Friday, stopping the clock at 9.99 seconds in the final on day two of the SA Track and Field Championships in Pretoria.

Having established himself as one of the most consistent sprinters in the world by producing his 29th sub-10 performance, the powerhouse speedster said his successful start to the campaign had reinforced his confidence as he set his sights on the gold medal in track and field’s blue ribband event at this year’s Tokyo Olympics.

“It’s very important to be consistent here so when I get overseas I’ve got confidence, I’ve got the runs in and I’ve got the speed in me,” Simbine said.

“Now I can trust what I have in my legs to compete against those guys that side (on the international circuit).

“I just want to make sure I keep working at it and be ready for the Tokyo Olympics.”

ALSO READ: Semenya bags gold over 5,000m, not thinking about Tokyo just yet

Though Simbine had narrowly missed the podium at the 2016 Rio Olympics and the last two editions of the World Championships, finishing either fourth or fifth at all three events, he felt he was ready to challenge for the crown of world’s fastest man.

“I’m more mature. I’ve grown into the sport, I know my body and what it can do,” he said.

“My coach (Werner Prinsloo) and I know where we want to peak.”

Meanwhile, though fellow sprinter Wayde van Niekerk was expected to face stiff competition in the men’s 200m event, he received little resistance in the opening two rounds on Friday, with Simbine opting to focus on the short sprint and multiple athletes missing due to injuries.

After clocking 20.60 in the heats and 20.38 in the semifinals, Van Niekerk shouldn’t have too much trouble wrapping up the national half-lap title when he lines up in Saturday’s final.

“It was a good race. I can’t complain,” Van Niekerk said.

“It was a bit windy at a stage but it was a quality race.

“I had two solid opening races. I felt strong and comfortable.”

Van Niekerk wasn’t certain whether he would run many 200m races this year, but he said he would confirm his plans with his new coach Lance Brauman when he arrived at his new training camp in the United States next week.

He was likely to concentrate on defending his Olympic 400m title in Tokyo.

“It’s about finding a balance between my events,” he said.

“I’m using the 200m to build towards the rest of the season and gradually get to where I want be race-wise.”

Can SA's struggling Olympic stars turn things around?
6 days ago
6 days ago

Can SA's struggling Olympic stars turn things around?
6 days ago
6 days ago