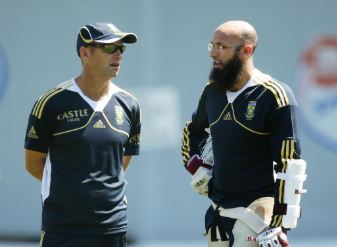 Hashim Amla was a dream to work with because he was a "complete player", says Gary Kirsten. Photo: Matt King/Getty Images.

Yet when he’s asked to chat about Hashim Amla – who on Thursday will become the eighth South African to play 100 Tests – there’s a distinct tone of excitement.

“The thing that stands out is his willingness to continually improve. His current indifferent form is normal for any player. It shouldn’t detract from his work ethic.”

When Van Zyl was tasked with guiding the Proteas in 2010 following the sudden resignation of Mickey Arthur, he didn’t inherit the complete batsman the team now possesses.

“Hashim was a stalwart of the Test side but at that stage we had only starting using him as an opener in one-day cricket,” said Van Zyl.

“I’d like to think it was my coaching staff that developed him into such a brilliant opener against the white ball.

“But it was also down to him. Hashim made the conscious effort to become a more versatile player, I still find it astounding that he can score close to a run-a-ball without truly changing his approach to batting.”

Gary Kirsten, one of the Proteas to have played a century of Tests and the mentor who guided the national side to the top of the Test rankings, raves about the “privilege” of coaching Amla.

“I’m not actually sure if I really coached him,” chuckled Kirsten.

“When I took over the side, he was a rounded cricketer. Hashim was crucial to our plans.”

Kirsten is particularly impressed with the way Amla managed to balance the demands of the game and life.

“But even though he’s constantly talking cricket, he never felt overbearing. In fact, Hashim never allows the sport to dominate his life.”

Kirsten also believes the excitement of Amla’s milestone will be highlight of his life.

“I experienced it myself. When he walks out to bat, the memory will be etched forever. Hashim deserves it for being such a hard-working player.”