Lungi Ngidi can’t quite save Proteas in chaotic Wanderers T20 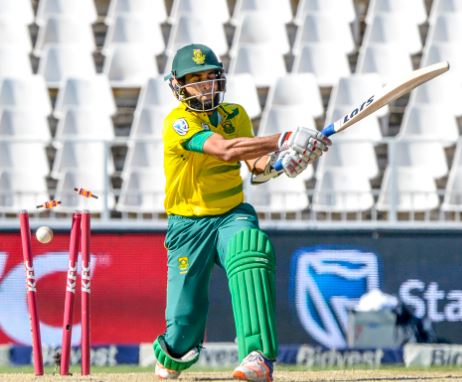 Sri Lanka have been in South Africa for more than five weeks.

In that time, they haven’t won a single game of cricket.

But on Sunday that drought was finally broken as they kept the T20 series against a new-look Proteas alive with a nervy three-wicket win at the Wanderers.

In fact, at times, this victory was simply chaotic.

No sequence illustrated that better than the closing stages.

Chasing a target of 114 – the lowest in a T20 international at the Wanderers – the Sri Lankans were indebted to captain Angelo Mathews’ ice-cool, unbeaten 54.

Yet that match-winning contribution was almost cut short.

In the 18th over, Mathews rolled over his right ankle in completing a quick single.

He couldn’t apply any pressure on that foot but nonetheless gained strike for the final six balls.

Proteas skipper Farhaan Behardien took a gamble on Warriors left-arm spinner Jon-Jon Smuts to bowl the last over and it’s a decision that should’ve paid off.

Mathews mistimed a pull but Heino Kuhn overran the ball and dropped the chance.

After that, the visitors’ leader smashed two sixes to put a seal on a strange game of cricket.

Sri Lanka really shouldn’t have gotten themselves in that tangle.

20-year-old Lungi Ngidi built on the impression he made in Friday’s win in Centurion by producing a brilliant spell of 4/19.

His pace was instrumental in reducing Sri Lanka to 35/3 before the experienced duo of Mathews and Dinesh Chandimal (22) put on 51 for the fourth wicket.

But the youngster returned to snap up Chandimal and suddenly Sri Lanka imploded, losing a steady stream of wickets.

It certainly spoke of a team who had forgotten a bit how to close out matches.

However, the indomitable Mathews was not to be denied.

On a strangely slow surface, the Proteas once again showed how poorly they handle exotic spinners.

To be honest though, the damage was done earlier.

Tight, wicket-to-wicket bowling confounded a top-order that was far too impatient.