Another top-order batting collapse against NZ once again has the lower-order trying to rescue things. But it shouldn't be enough this time. 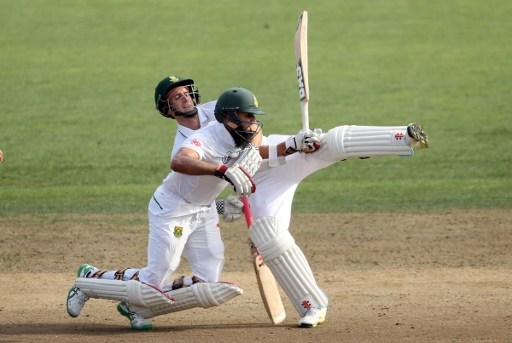 Theunis de Bruyn's collision with Hashim Amla, just before he was run out, summed up the Proteas' day. Photo: Michael Bradley/AFP.

You get the sense the Proteas are now eager to end their tour of New Zealand given the dire situation they are in in the third Test in Hamilton.

South Africa went to stumps at 80/5 in their second innings, still 95 runs short of making the home side bat again.

One can talk about their previous history of saving Tests – like Adelaide in 2012 or Colombo in 2014 – but that’s hardly the issue at hand here.

Also read: Morne Morkel’s grabs his 250th on one of his ‘toughest’ days

This batting collapse confirms that the Proteas top-order needs a break mentally.

They’ve never been able to fire in this series and relied on the middle- and lower-order to clean up their messes.

But it was only a matter of time before something like this would happen.

Fatigue is not an excuse but it’s understandable to an extent.

This tour is not the end of a busy season, it’s merely the start.

In two months’ time, the Proteas go to England for almost four months and still have a full domestic campaign against Bangladesh, India and Australia stretching well into next year.

That’s why one could imagine they’re eager for this tour to end.

Dean Elgar completed his journey from hero in Dunedin to zero here as he poked at a ball outside off-stump.

It’s clearly a problem for him and he needs more discipline in that regard.

Elgar started with scores of 140 and 89 but his next four innings delivered 36 runs.

Theunis de Bruyn (12) completed a nightmarish debut by being run out after he collided with Hashim Aml (19) mid-pitch, while his senior partner edged a cut.

JP Duminy also needs to regather himself after he was also dismissed cheaply again when he misjudged a Jeetan Patel (2/22) delivery.

It will be up to Faf du Plessis (15*) and Quinton de Kock (15*) to try and salvage this situation yet it seems unlikely.

Earlier, New Zealand captain Kane Williamson crafted a beautiful 176 to lead his side to 489.

However, it was only when Colin de Grandhomme struck an aggressive maiden Test fifty – 57 off 70 – that the home side got out of sight.

The Proteas bowler generally bowled with good discipline as Morne Morkel (4/100) and Kagiso Rabada (4/122) shared eight wickets between them.

Vernon Philander again bowled excellently without much luck but as it turns out, you can’t really expect to win without a bit of it.