The Springbok No 8 admits his lungs 'weren't holding up so well' after 30 mins of play but his sevens experience helped him get through a decent starting debut. 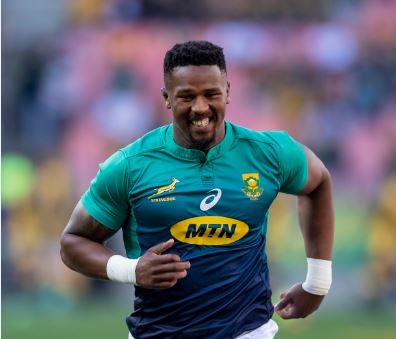 Sikhumbuzo Notshe didn’t join the Blitzboks to go and merely add to his attacking skills.

Instead, he wanted to improve his work-rate and learn to cope with the speed of the game.

That was just under a year ago.

On Saturday, he made his starting debut in a Springbok jersey against the Wallabies in Port Elizabeth.

“The biggest lessons I learnt was the principle of returning to play as quickly as possible,” said Notshe.

“What I mean by that is that at sevens level, you really have split seconds to get back into the defensive line to start defending again. Getting up quickly and creating opportunities for those around is really important.”

The 25-year-old certainly had to recall that lesson pretty quickly during the weekend’s 23-12 victory.

Notshe hadn’t played for some weeks and his only opportunity for match fitness before the Test was a Currie Cup appearance for Western Province last week.

And as everyone will tell you, Currie Cup intensity is hardly Test intensity.

“The difference is big. Currie Cup is not international standard. By the half hour, the lungs weren’t holding up so well anymore. That was a bit tough,” said Notshe.

“But I managed to dig a bit deeper and carry myself around the park.”

Nonetheless, Notshe hopes his 45-minute stint is the start of greater things.

“This was an important step for me, for my growth,” he said.

“I haven’t played much at this level. Coaches aren’t going to throw you into the deep end but I really think there’s been growth. I’ll always believe I’m not the finished product, if ever and will always strive to get better weekly. I’m going to work on my weaknesses, not ignore them.”