Another five-wicket haul for the evergreen spinner - in a different format - but the hosts were given a scare by an enterprising lower order. 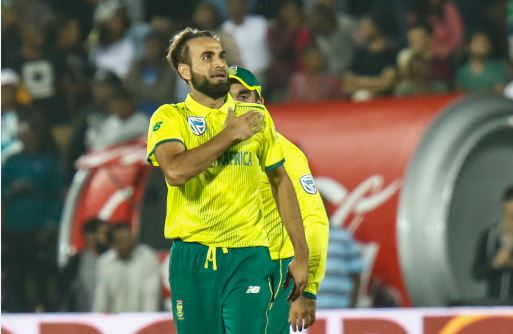 Imran Tahir was again proved to be too hot to handle for the Zimbabweans as he guided the Proteas to a 34-run win in the first T20 in East London on Tuesday night.

The veteran leg-spinner claimed stunning figures of 5/23, less than a week after his 6/24 in the second ODI in Bloemfontein.

Tahir’s googly was again his most profitable delivery as a succession of top order batters simply failed to read him.

In fact, he was on a hat-trick twice on different occasions during the innings.

Stuck in a mire on 70/7 in the 13th over, Zimbabwe seemed headed for another substantial defeat.

But then Brandon Mavuta, a promising young leggie, smashed Tahir for a six in this last over.

That blow seemed to inspire Peter Moor (44 off 21), a specialist batsman, to open his shoulders.

The 27-year-old whacked an astonishing 25 runs off Tabraiz Shamsi’s last over, including four sixes off the last four balls.

It was an immense show of power but it also raised concerns over the wrist spinners current form.

He was poor in the final ODI in Paarl and bowled a litany of bad deliveries in this innings as well.

Earlier, the Proteas managed a mediocre 160/6 as the batting, in general, once again proved shaky.

The effort was built around debutant Rassie van der Dussen’s composed 56 off 44 deliveries.

Picked on some fine form in T20 stints in Canada and the Caribbean, the 29-year-old stalwart from the Highveld Lions showed why it’s valuable for national selectors to act when the pot’s still boiling.

Van der Dussen’s first boundary in international cricket was a sumptuous six off his pads, one of his biggest strengths, while there also was a classy cover drive for four.

Overall, it was a workmanlike effort.

He received good support from a subdued David Miller, who made 39 off 34, but their fourth wicket stand of 87 proved invaluable.

Faf du Plessis had made the early running with a sprightly 34 though the rest of the batting was distinctly average, including Gihahn Cloete, who was dismissed for two.

While Kyle Jarvis profited at the death to record figures of 3/37, it was the canny Chris Mpofu (2/24) and leg-spin of Mavuta (1/19) that was most impressive.