WATCH: Faf laughs at this moment of weirdness

The Proteas didn't have much to laugh about in their tour match in Canberra on Wednesday, but George Bailey's stance did provide brief relief. 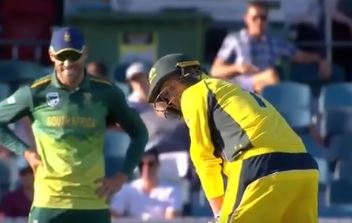 George Bailey has Faf du Plessis in stitches with his stance. Photo: Twitter.

The Proteas’ clumsy four-wicket defeat to a Prime Minister’s XI on Wednesday was no laughing matter.

After all, the tour match served as South Africa’s only warm-up before the three-match ODI series against Australia starting on Sunday.

However, skipper Faf du Plessis did have a chuckle during the home side’s innings when his counterpart, George Bailey, came out to bat with one of the weirdest stances ever seen.

Wouldn’t you laugh also if you had to witness this?

Faf having a cheeky giggle in the slips at Bailey's extraordinary stance ???? pic.twitter.com/q30H7chZeP

It clearly worked for Bailey though – he ended unbeaten on 51.