Following yet another decent bowling display, the visitors hand the embattled Aussies a morale-boosting win with a wasteful batting display. 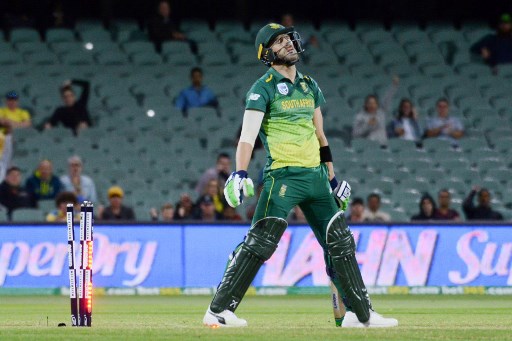 South African batsman Faf du Plessis reacts after being dismissed during the second one day international cricket match between Australia and South Africa at the Adelaide Oval in Adelaide on November 9, 2018. (Photo by Brenton EDWARDS / AFP) / -- IMAGE RESTRICTED TO EDITORIAL USE - STRICTLY NO COMMERCIAL USE --

People could (rightly) say Australian cricket is in a state of chaos given the aftermath of its culture review and that South Africa’s own challenges look rather small in comparison.

However, from a pure cricketing perspective, the Proteas and Aussies are actually in the exact same situation – eerily so after Aaron Finch and his troops squared the ODI series at one-all with a seven-run win in Adelaide on Friday.

These are two sides with potent, performing bowling attacks yet batting orders starved of confidence and struggling to cope without leading batsmen.

Australia don’t have the suspended David Warner and Steve Smith.

This time round it was the Proteas’ turn to underperform with the bat, despite being set a manageable target of 231.

Frustratingly, the visitors proved their own worst enemies.

The trend started with Quinton de Kock flicking a rather undemanding Mitchell Starc delivery to deep leg, a poor and irresponsible shot for a senior player.

Aiden Markram (19) then ran himself out after pushing for a third run and then not committing fully, before Heinrich Klaasen (14) pulled a Marcus Stoinis long-hop to midwicket.

South Africa’s most experienced pair, Faf du Plessis and David Miller, had threatened to put their side back on track with a fifth-wicket stand of 74.

That alliance was ended when Du Plessis (47) chopped on and so too the Proteas’ hopes of an early series win.

Stoinis claimed the key wicket of Miller, who was responsible but restrained in making 51, to finish with 3/35.

In hindsight, South Africa will regret conceding a crucial last wicket stand of 27 when they all but wrapped up the fragile Aussie batting again.

But Adam Zampa (22) took a liking to Lungi Ngidi as the home side scraped together vital runs.

Overall though, the Proteas attack once again proved hugely effective.

Dale Steyn (2/31) and the hostile Kagiso Rabada (4/54) combined superbly once again, while the seamers of Dwaine Pretorius proved surprisingly effective as he grabbed 3/32.

Both South Africa’s bowling all-rounders  – the other being Andile Phehlukwayo – have bowled well in their respective outings.

It makes for a pleasant selection dilemma for Sunday’s series decider in Hobart.