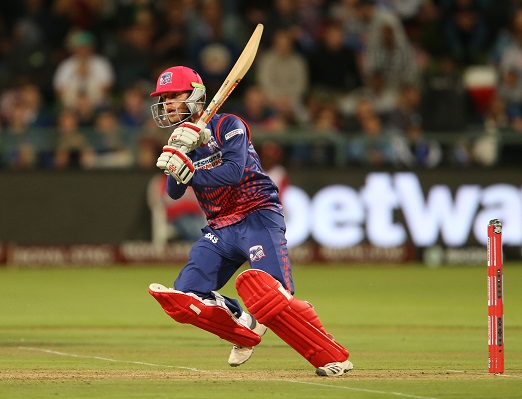 The Cape Town Blitz delivered a spirited performance to get their Mzansi Super League campaign off to an ideal start, disposing comfortably of a lacklustre Tshwane Spartans by 49 runs at Newlands on Friday night.

A brilliant fourth wicket stand of 100 in just under 10 overs between 21-year-old Kyle Verreynne and Pakistan import Mohammad Nawaz (59) laid the foundation for the home side’s imposing total of 180/4, before a varied attack gradually worked their way through the Spartans’ batting.

The dynamic AB de Villiers had threatened to deliver something spectacular with a powerful and inventive 59 off just 30 deliveries, but his dismissal sparked a collapse.

24-year-old Nawaz showed that he has the potential to be one of the best buys of the summer, turning the tide in the Blitz’ favour with a muscular effort off 37 balls. However, it was the compact Verreynne that stole the show.

The former national Under-19 stalwart broke the shackles with a couple of reverse swept boundaries and then reverted to proper cricket shots, finishing with an unbeaten 53 off 34. Vitally, he didn’t merely play second fiddle to Nawaz in their partnership, instead matching his scoring rate.

Ferisco Adams has been a late bloomer at franchise level, but he’s developed into a very good T20 weapon. Known as the “Iceman” for his calmness under pressure, the 29-year-old recovered from conceding 18 in his first over to snap up two wickets in his second – including the crucial scalp of De Villiers. He ended with 3/28.

It surely had to be Adams’ second over. He had De Villiers caught on the deep square boundary and then castled the dangerous Rilee Rossouw (15) the very next ball. Game over.