Elgar very much aware of the ‘Faf’ trap

The Proteas stand-in skipper knows he'll have to keep an eye on the over rate at the Wanderers. 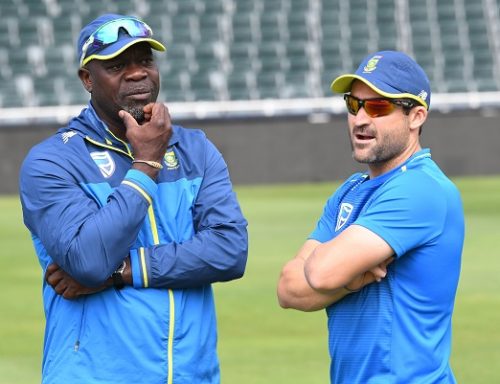 Dean Elgar needs no reminding that he can step into the very same trap that led to him being appointed as the Proteas’ stand-in skipper for the third Test against Pakistan starting on Friday at the Wanderers.

The gritty left-hander fills the void left by Faf du Plessis, who has been suspended following the side’s poor over rate at Newlands last week.

“Thanks for reminding me,” Elgar quipped on Thursday after being about the issue.

But those concerns are made all the more valid by the fact that South Africa are once again expected to play an all-seam attack.

That inevitably leads to overs being completed more slowly.

Elgar though plans to use his own brand of useful, if part-time spin to assist the quicker men.

“If we’re going to go the route of four seamers, then I’ll bowl a few overs in every session,” he said.

“If Aiden (Markram) is fit, he’ll also have to come in as a bowling option. So there are ways and means to get around it. We’ll just have to box clever, but four seamers are always going to make things tough from a time perspective.”

Given the “good” nature of the Wanderers surface, Elgar better steel himself for some overs as picking a frontline spinner could be deemed wasteful.

“We’ve got a good headache at the moment in terms of our bowling attack,” he said.

“We can go with four seamers and rip open those wounds that we’ve already inflicted on the Pakistan batting, but we also have a very reliable spinner in Keshav Maharaj. He’s done absolutely nothing wrong. To win, we’ve got to put out our best side and at the Wanderers conditions assist seamers. Our fast bowlers have been our main weapon in this series and to change that will be a big call.”