Ironically, the batting capitulation happened on what is arguably the best pitch to date of the Test series against Pakistan. 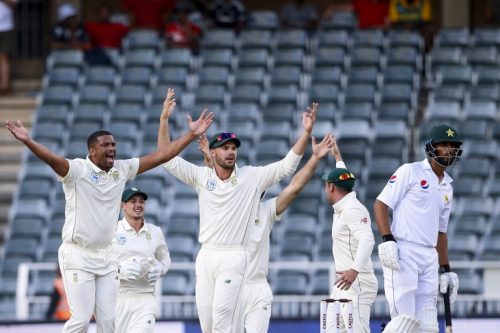 The Proteas had talked about not being complacent in the third and final Test against Pakistan at the Wanderers, but there wasn’t much evidence to suggest they tried to back their words with deeds.

The hosts suffered a stunning collapse on Friday’s first day, slumping from 229/3 to a disappointing 262 all out.

At least some of that pain was soothed by Vernon Philander’s cracking four-over spell, which delivered figures of 2/1 as he struck with consecutive deliveries in his second over.

Pakistan ended the day on a wobbly 17/2.

Perhaps the most frustrating thing about the batting performance was the fact that this pitch looks by far the easiest to play on in the series.

And by all accounts South Africa cashed in initially against a generally wayward Pakistani attack.

However, a fine spell by Mohammad Amir (2/36) after tea seemed to inspire the visitors s they exploited their opponents’ lazy batting.

All-rounder Faheem Ashraf, brought into the side, was the pick of the bowlers with 3/57.

Markram shows the way … both ways

Having passed a late fitness test, the classy opener didn’t show much discomfort as he pasted the visiting attack, striking 16 mostly elegant boundaries in a superb 90 off just 124 deliveries.

Markram’s ability to score at a quick rate without much apparent effort is one of his biggest strengths yet it also illustrated that there’s not necessarily a lot of gremlins (to date) in this surface.

It was a huge disappointment when he managed to edge a flick down leg when it should’ve sped to the fence.

It set the tone of South Africa’s batters not taking advantage of solid platforms.

Rookies please and then frustrate

During their fourth-wicket partnership of 75, South African cricket fans gained a pleasing glimpse into what the future might hold with Theunis de Bruyn and Zubayr Hamza.

It was fun watching how the two “new generation” batsmen took responsibility, with Hamza – on debut as the 100th Protea cap – in particular enjoying a bright start.

His first boundary in Test cricket was a pulled six off Shadab Khan and followed that up with a four.

In fact, his first 21 runs came off a run-a-ball and he certainly looked the part.

De Bruyn was more cautious given how he’s under pressure to retain his place before the Pakistani attack started affording him width, allowing him to cut a few boundaries.

He was one away from a deserved fifty when he strangely went across the line to Mohammad Abbas (2/44) and missed a straight one.

Hamza was also forced to retreat into his shell and withdrew he’s bat too late to a reverse swinger from the menacing Amir.

Like Hashim Amla (41), starts were not going to be converted.

The collapse was upon the home side.

Nature gets the better of skip Elgar

Appointed as stand-in captain for the suspended Faf du Plessis, Dean Elgar noted how he wanted to savour this honour after a “chaotic” first time in England in 2017.

He certainly seemed to get off to a good start when he won the toss and chose to bat on fairly easy-paced surface.

But that’s where the happiness ended.

There was a streaky, prod-like boundary in the first over and two consecutive leaves again Abbas in the seamer’s first over.

However, then he fished one outside off and was caught behind … captaincy experience soured.

It didn’t help that he was caught by television shouting “F**k!” in frustration walking off.

That didn’t feel very captain-like, even if it was understandable.