The Proteas all-rounder's international career has had its fair share of good fortune. But he's earned it. 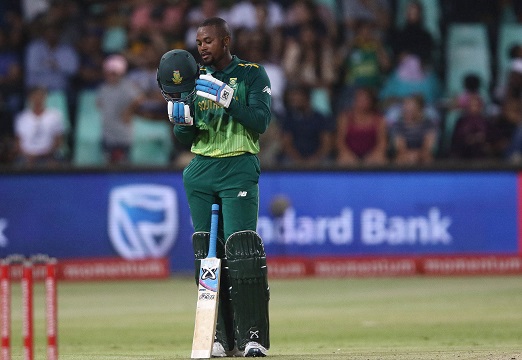 Andile Phehlukwayo during the 2nd Momentum One Day International match between South Africa and Pakistan at Sahara Stadium Kingsmead on January 22, 2019 in Durban, South Africa. (Photo by Anesh Debiky/Gallo Images)

By the time he guided the Proteas to a tough but stirring five-wicket victory over Pakistan in Durban on Tuesday night, the visitors would’ve felt christening him that was prophetic.

The 22-year-old all-rounder indeed had his fair share of luck during a match-winning, career-best unbeaten 69, something that’s happened quite frequently since his debut in 2016.

Various streaky shots were mixed with a LBW that was successfully reviewed as well as a dropped catch.

However, there was precious little fortune involved in the two sixes off the spin of Mohammad Hafeez or the glorious cover drive against Shaheen Shah Afridi, who had earlier tortured the Proteas’ top order.

And that’s what should define Phehlukwayo’s progress as an international cricketer: Lucky makes his own luck.

“I put a lot of pressure on myself because I know I want to perform by contributing with bat and ball,” he said after his Man-of-the-Match showing at Kingsmead.

“All I can do is keep on working hard and stick to the game-plans I’ve developed and execute them on the field.”

Phehlukwayo had been under pressure to an extent due to the fact that national coach Ottis Gibson is inclined towards a batting all-rounder for the World Cup year.

It meant he needed to deliver a statement with the willow.

“When we’re batting in the nets, our batting coach, Dale Benkenstein, expects us as individuals to come up with personal game-plans,” said Phehlukwayo.

“You use your strengths and execute it during a match. Obviously, it won’t always be suited in a specific situation and then you have to come up with a Plan B. But I wanted to be aggressive.”

The contribution of the impressive Rassie van der Dussen, who ended unbeaten on 80, can’t be underestimated.

“There was quite a hill to climb and a lot of runs still needed. Without Rassie there it would have been really tough, but credit goes to him. He played an unbelievable knock,” said Phehlukwayo,

On the bowling front, the Dolphins star remains a canny wicket-taker, claiming a career-best 4/22.

He’s now just one scalp away from 50 ODI victims and doing it Friday in Centurion would mean he’d be quicker than legends like Allan Donald and Makhaya Ntini.

“I wanted to keep my plan the same and try to hit a hard length. With (Pakistan captain Sarfraz Ahmed) I luckily enough just got one to nipple back and it went through the gate.”