Ironically, the fault that caused the problems wasn't loadshedding at all. 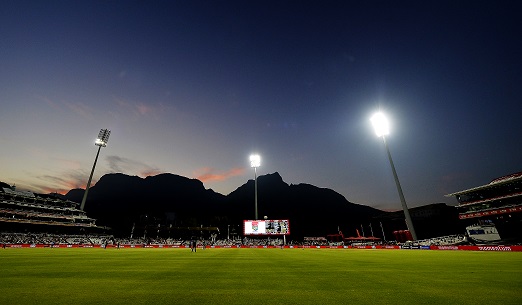 Play stopped due to the middle flood lights not working during the 5th Momentum ODI match between South Africa and Sri Lanka at PPC Newlands on March 16, 2019 in Cape Town, South Africa. (Photo by Ashley Vlotman/Gallo Images)

The Proteas farcically clinched a 5-0 ODI series whitewash against Sri Lanka after a floodlight failure at Newlands meant they won the final match by 41 runs on the DLS-method.

Chasing 226 for victory, South Africa strode comfortably to 135/2 when one of the stadium’s pylons went out.

Ironically, the delay had nothing to do with the loadshedding that’s gripping the country this weekend as one of the circuits broke.

Technicians were called out and even had to take the radical step of having to reset the whole system.

But the faulty pylon would not budge.

Aiden Markram had seemed set for a potentially significant score in terms of his World Cup aspirations, playing a compact, controlled innings in ending on an unbeaten 67 off 75 deliveries.

He had stabilised the innings with Faf du Plessis (24) after the early loss of the prolific Quinton de Kock.

Rassie van der Dussen then surely booked his showpiece spot in ending on an unbeaten 28.

Earlier, the Sri Lankans staggered again in scraping together their total.

Only Kusal Mendis, who made a battling 56 off 84, from the top order could muster a score of substance.

They were given some hope by a 61-run eighth wicket stand between Priyamal Perera (33) and Isuru Udana (32).

Kagiso Rabada was South Africa’s most productive bowler with 3/50, though two of those scalps came in his final over.

Imran Tahir was stellar in grabbing 2/33, while Anrich Nortje controlled his quick bowling well too to finish with 2/35.